Twenty-one years have passed since company Ralf Ringer foundation. It has three own factories, the largest distribution network (over 1 700 stores) and the biggest in the country production volume of the footwear for men. The future footwear passes a long way before the start of production. The team of brand-managers creates the technical assignment on the basis of worldwide fashion trends, market analysis and outcome of the previous collection sale. The fashion designers draw the collection on its base and show it to the assortment department and company executives at the draft project council. Further, the models are reputedly chosen, which will be in-demand at the market. The manufacturing plan and pattern drawings are created for these models, and the first samples are designed in the project shop. A sewn collection is demonstrated to expert council again, who consider each fashion and model in a staged manner, send them for finalization to the designers and approve the resulting assortment. But now the collection is presented for purchasing agents from different stores. Those models, which have been selected by them, are fed to mass production. 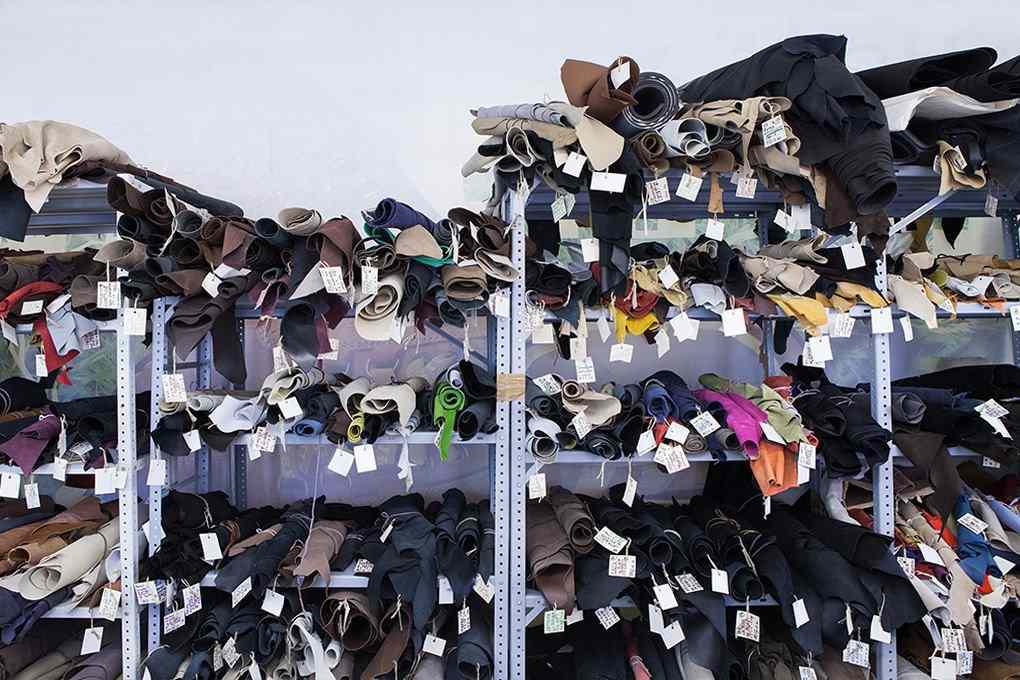 Find Ralph Lauren Boots on Amazon
The leather made of four countries is applied at the factory: Russian for brutal boots for men, Italian for classic models, Argentine for semi-athletic shoes, and the French raw materials of high selection are applied to the most expensive models manufacture. 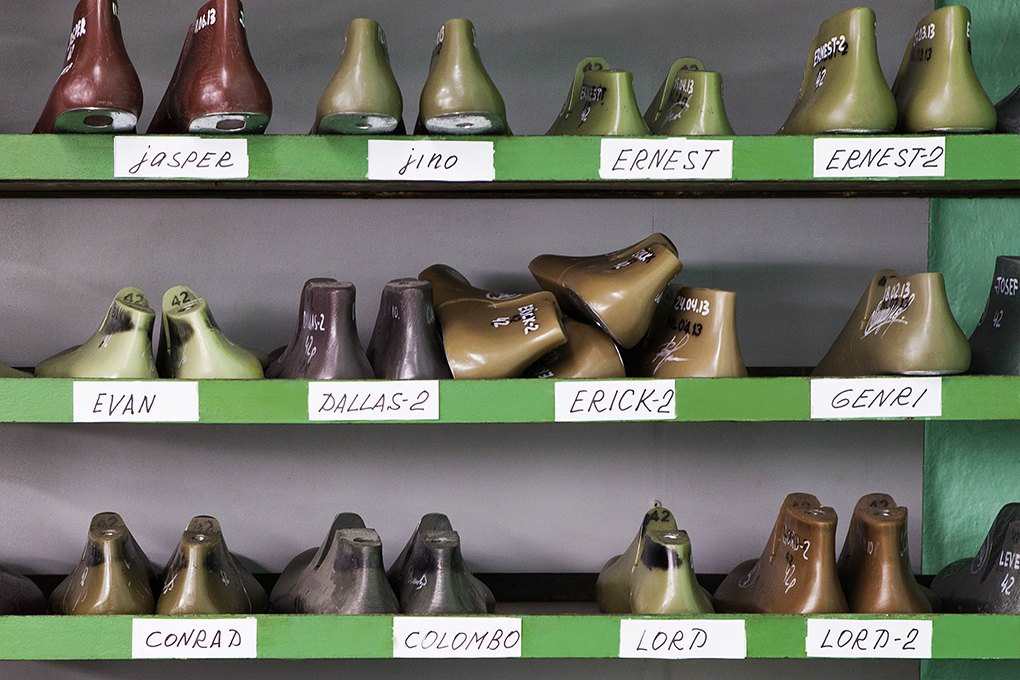 The shoe-trees are designed according to the specialties of the Russian type foot. Russian people have more sizable and broader foot in comparison with the European so that the classic Italian footwear is frequently not suitable for our men. The breadth of a typical Russian foot may be not only the genetic trait but also the consequence of an orthopedic flat foot developed in childhood as result of the inconvenient footwear.

The elements for future shoes are cut in this shop. It is no coincidence that the shop is located on the first floor, the presser bars for cutting off elements are extremely heavy and the floor structures just could not take them. 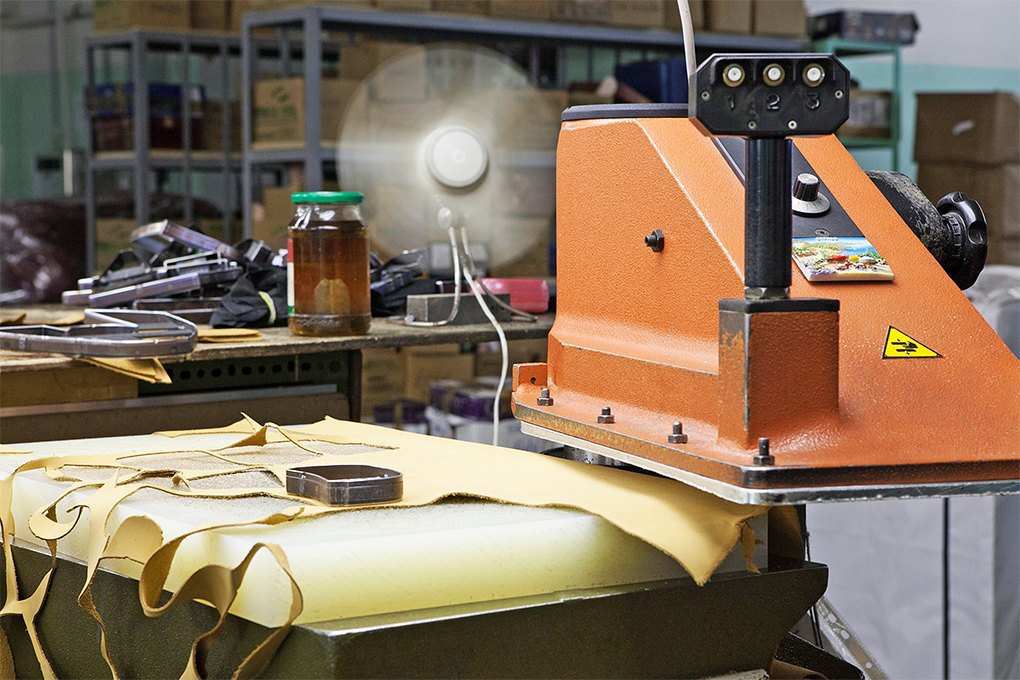 A good exponential way of thinking is required for working here, in order to correctly place the molds on the material cut. 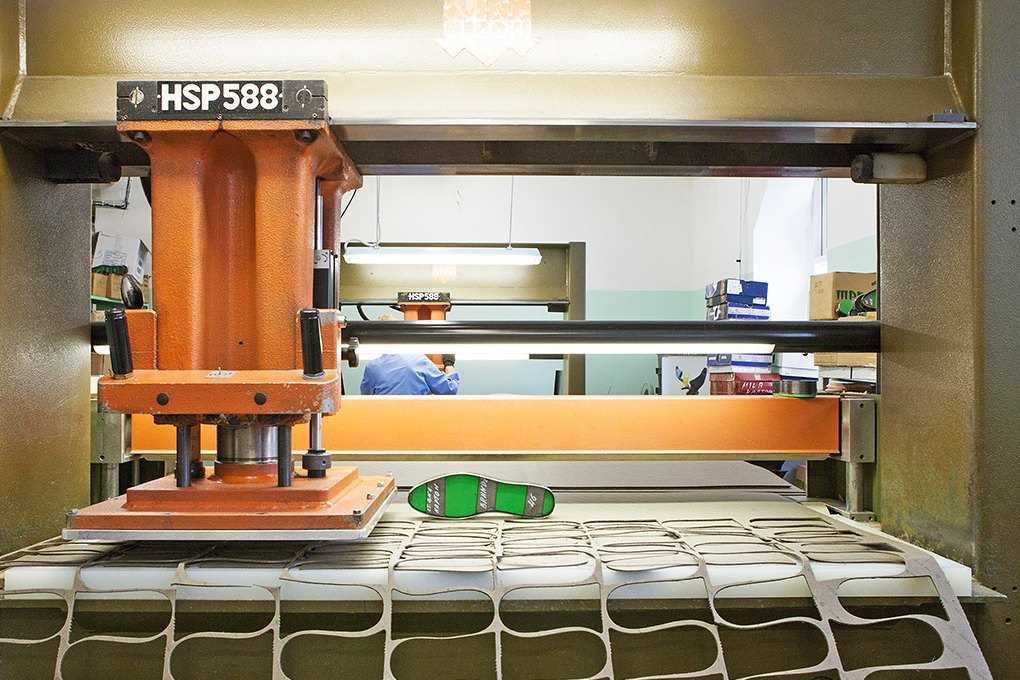 The inner soles are cut in such a way. Each shoe compulsory contains the insole made from the cellulose – a very dense and thick material (with rare exception, as for instance the moccasins are made without the insole), in order to keep its deformation resistance. It creates the carcass of a shoe, similar to the bones in the body. 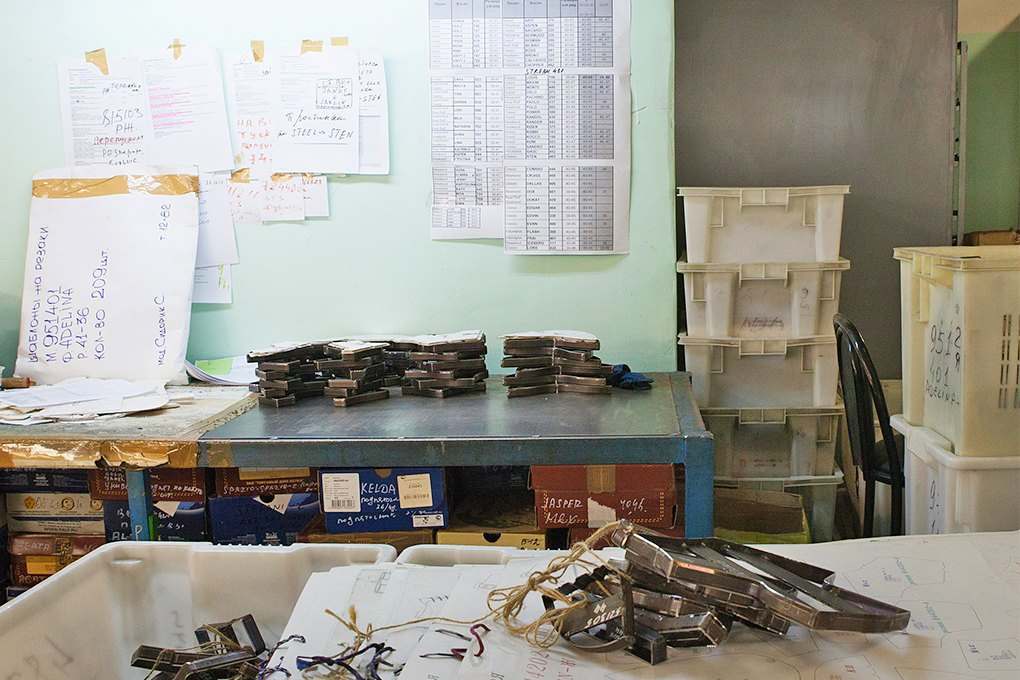 The samples knitted by a twine on the table are designed for the boot of definite fashion and size. Each such detail is inserted in a cutter, which cuts the corresponded parts of material under pressure. 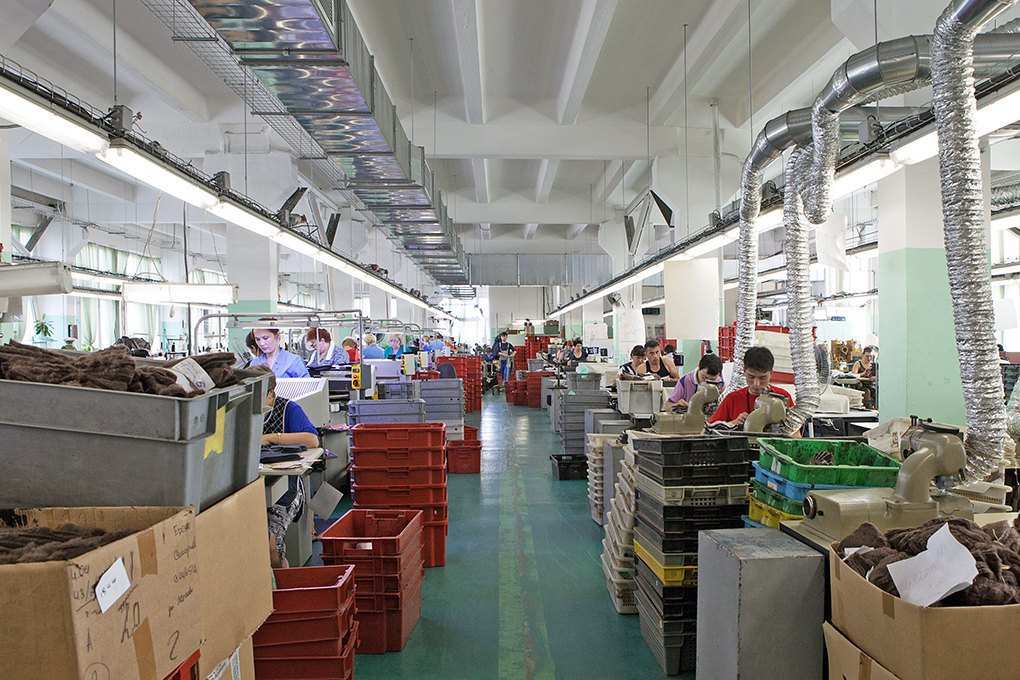 It is a stock-preparation shop, where the details cut out earlier are processed. They are painted, burned by means of a special blowlamp, bent and marked out with a silverpoint. Then the details are marked: there is data about the color, size, number of run and type of a shoe on each boot. 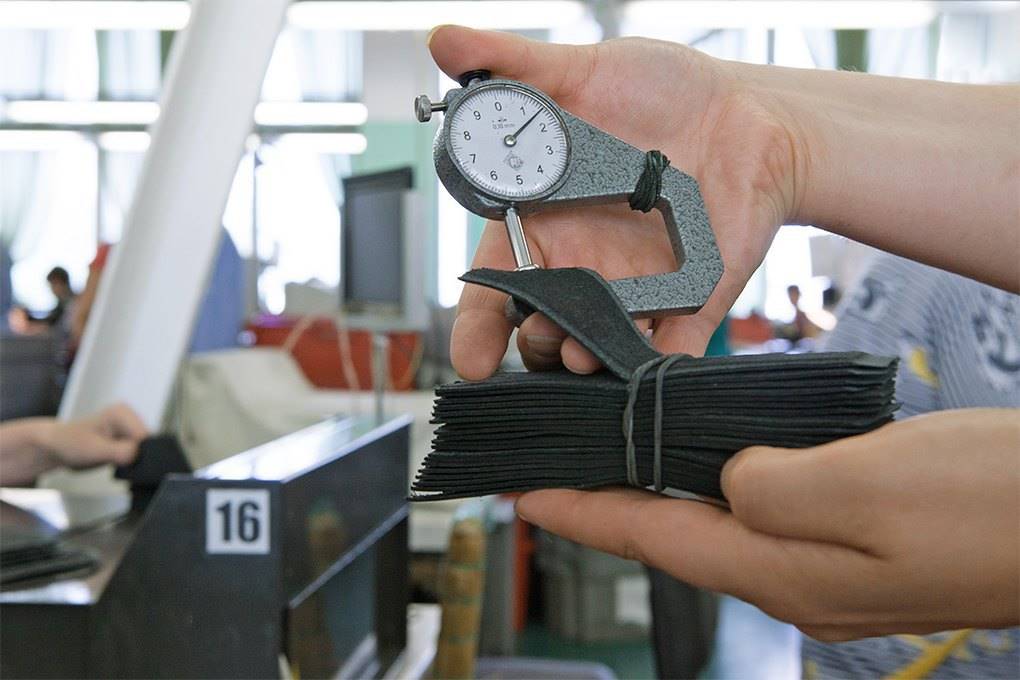 The important nuance while a shoe manufacturing is a compulsory absence of any significant scars, seams, which can traumatize the foot. The edges of some details are smoothed down in order the shoes will cause no chafes. The thickness of the leather is controlled by a thickness measurer. 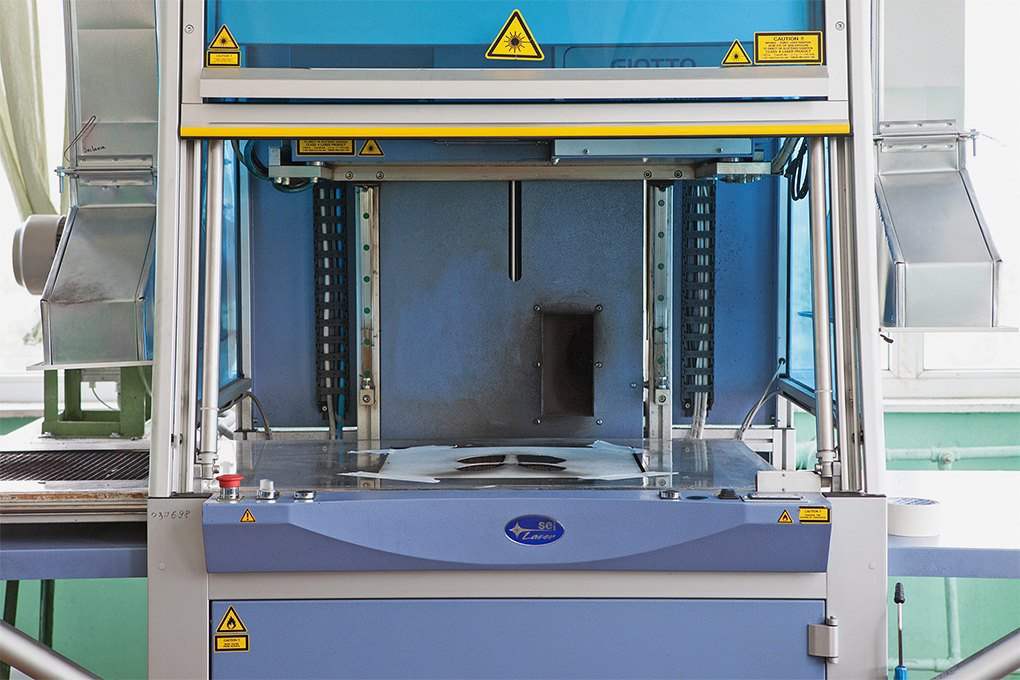 There is a strong smell of burned leather in the shop, where the laser perforation is conducted. According to a template generated by a program, laser burns out precise “little holes” in the leather. 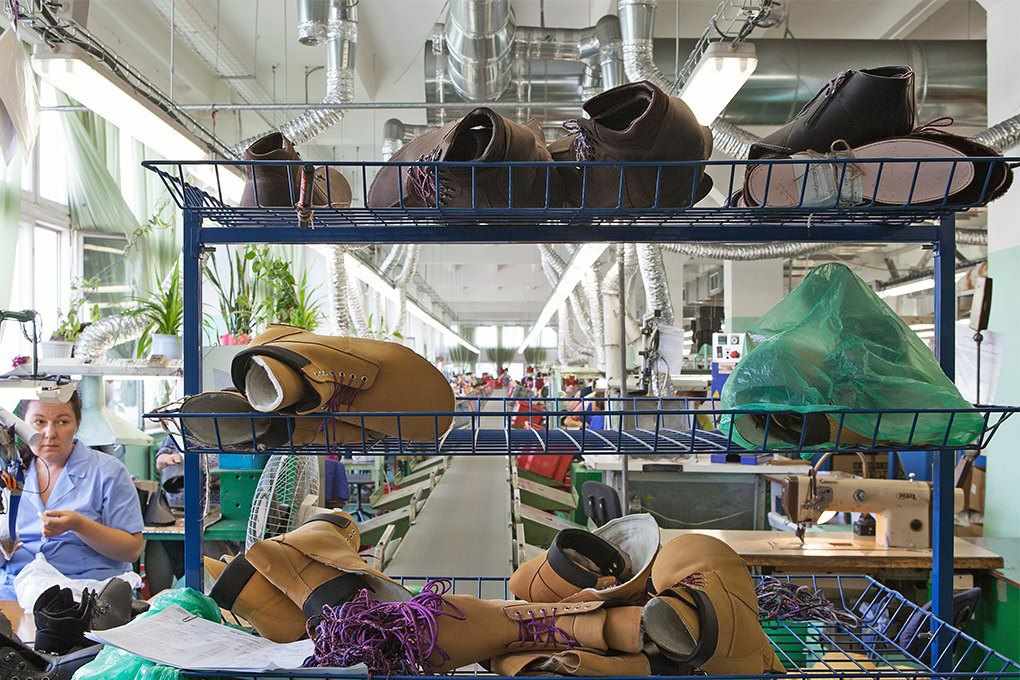 The upper part and lining are sewed in the next shop: topstitching, backstitching, gluing of details, cutting out the odds, adding the functional details, for instance, buttons and clasps. 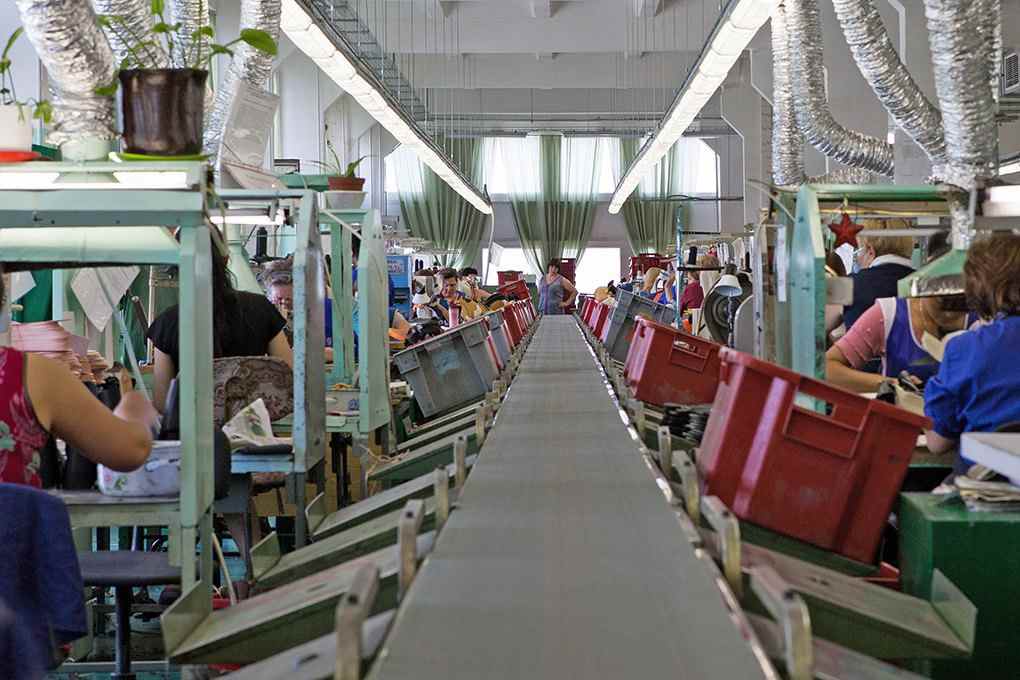 The boxes with products lay on the automatic transporter through the shop. A foreman puts the box on the transporter and pushes the number of a corresponding specialist on the remote, and the box is directed right to him for the operation fulfillment. When the operation has been fulfilled, the specialist returns the box with a product to a foreman, and he directs it to another operator. 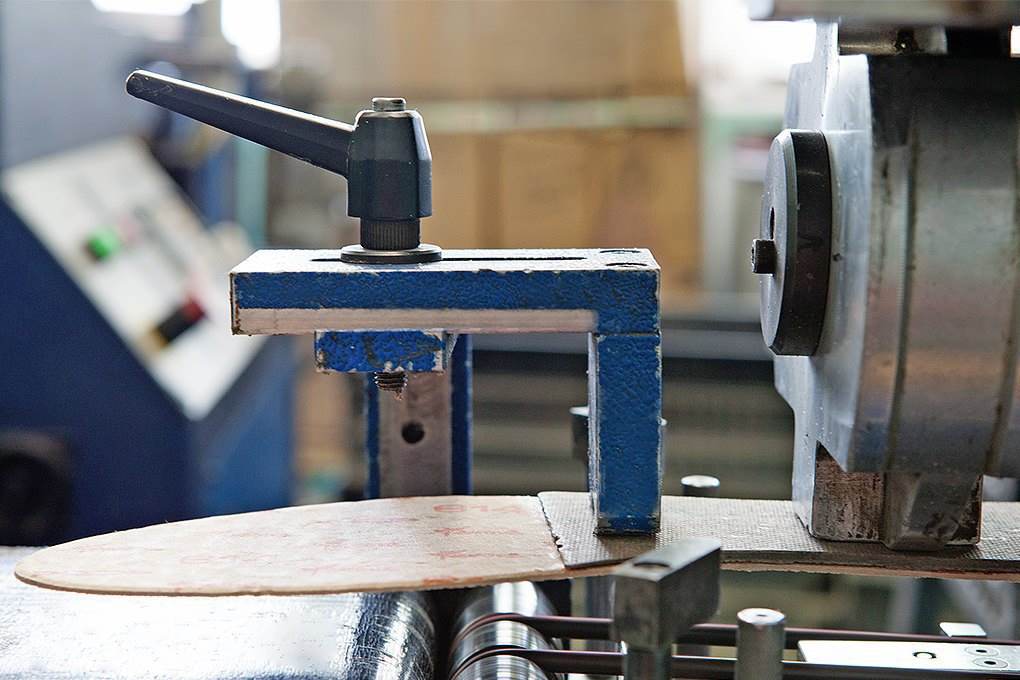 In this shop, the insoles are made, which are fixed to the upper part, and then to the outsole. The details of insoles, cut out on the first floor, (the major insole and heel area) are agglutinated together. 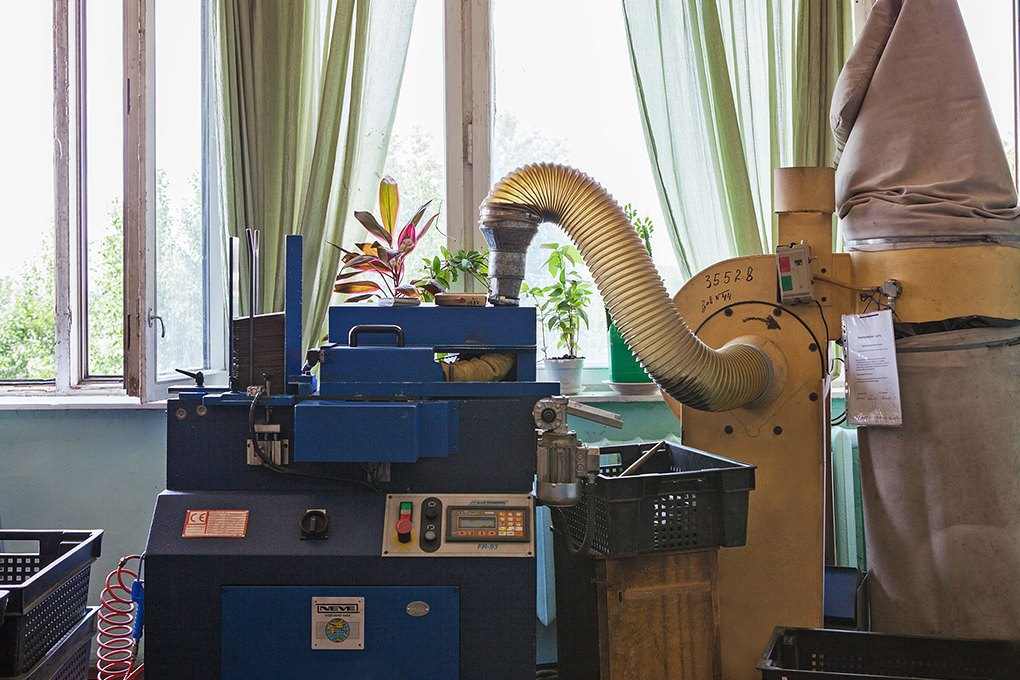 This machine makes a deepening in the insole, and then it will be inserted with an arch support. 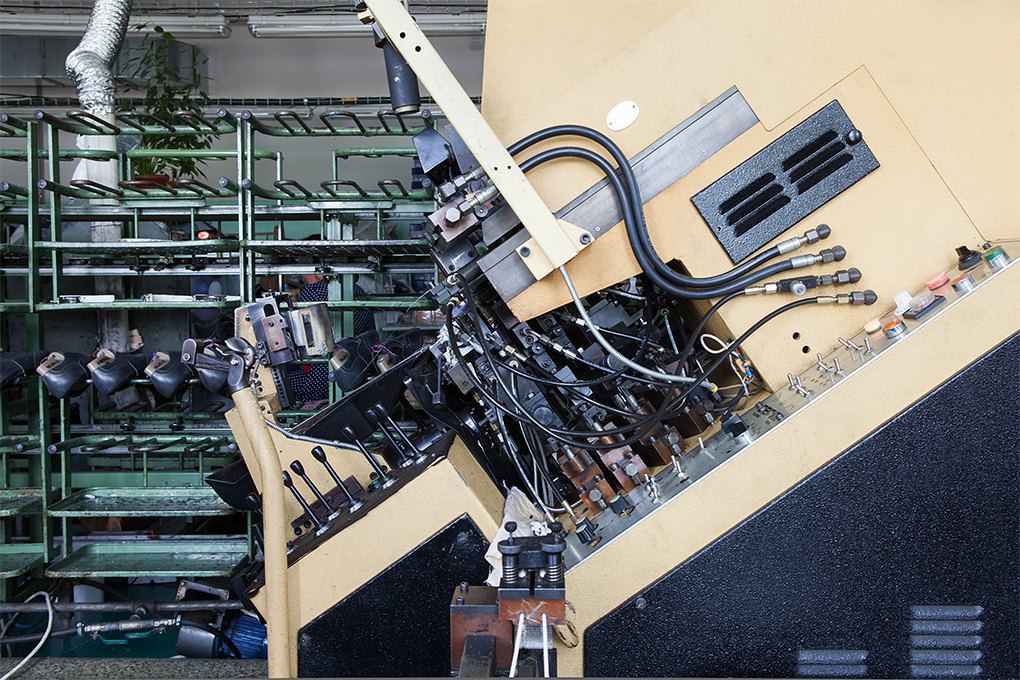 The follows stages are connected with the shaping of a shoe. Foremost, the cellulose insole is fixed by three nails to the shoetree. Then by means of the special machines lasting and agglutinating of toe and heel areas of the boot on the shoetree are made. The white fiber in a bobbin at the picture is polyurethane glue, which is heating up inside a machine. 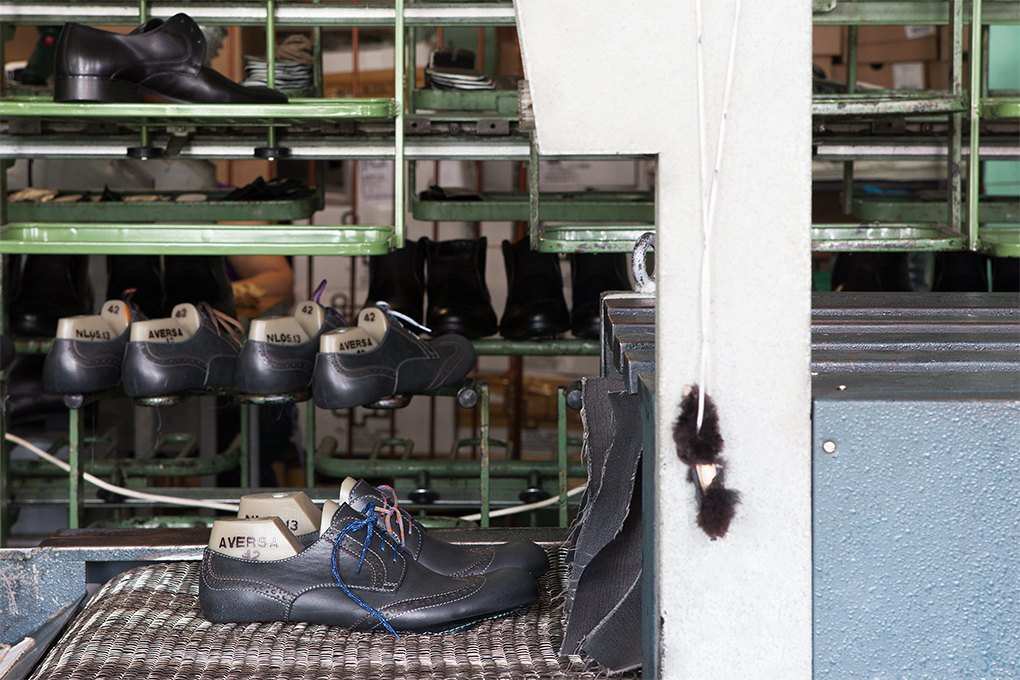 A shoe passes through the special sauna, where it is exposed to a wet-heat treatment, as a result of the shoe finally keep the shape of the shoetree. Afterwards, the pro-forma is prepared for sole attaching: the marks are washed out, the shoe is preliminary primed, polished and ground from the lasting edge by means of a coarse abrasive.

In order to join the upper part and sole, the leather should be a little disheveled in the point between sole and pro-forma for the upper part; thus, the elements are set more quickly. 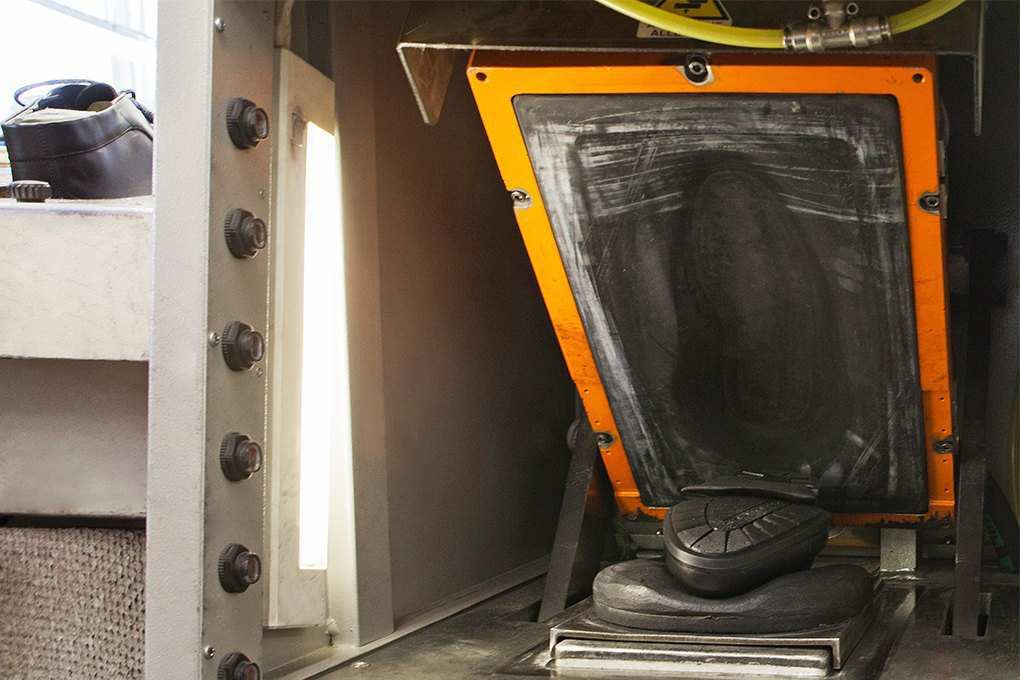 Further, the shoetree is taken out from the shoe, the insoles are inserted, the shoe is processed with a crème, painted with water-repellant paints, ground additionally, steamed with a special mini-iron, which outspreads the inner sock. Also, the boots are processed with carnauba wax, which is considered to be top-priced material in the shoe care products. Exactly through it, the boots look so shining in the stores.

The special industrial laces are applied for the correct shaping of the upper part on the shoe-tree, and then they are replaced with regular ones. 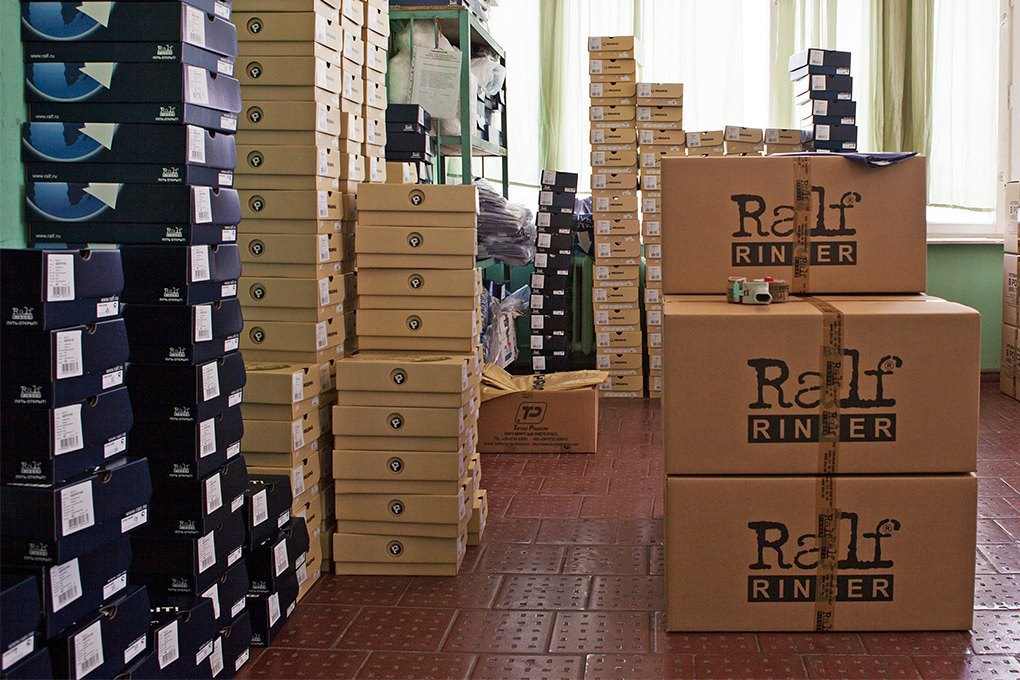 Hereafter a ready-made shoe is examined for compliance to the sample. If everything is in order, the paper ball is inserted inside, packed and put in the boxes. The future collection is always presented like a sample in the show room by the factory. 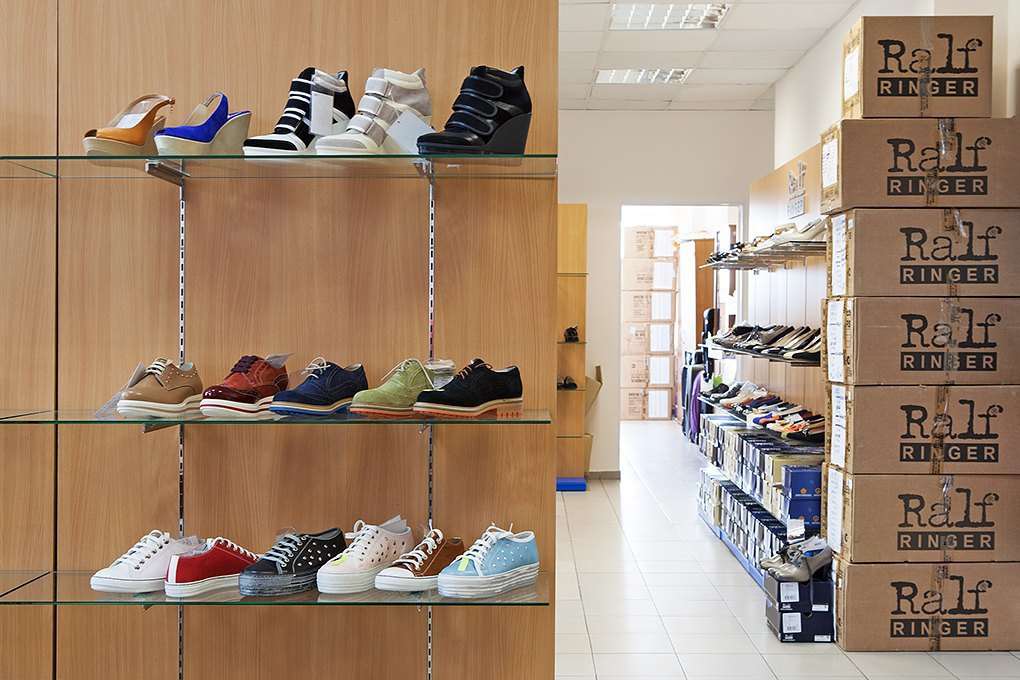 More than 40 workers labor at the creation of each shoe. As a rule, it contains from 40 to 60 elements, a separate worker makes the definite operation. Totally, approximately 3000 pairs of shoes per a day are produced at the factory.


Find Ralph Lauren Boots on Amazon
This article was prepared with help of http://www.the-village.ru