Emilio Zamberlan, the son of the founder of factory Giuseppe, got us into. Emilio has long since retired, his children Marco and Maria are managed by the factory. However, patrolling the possessions is one of the favorite old man’s pastimes:) 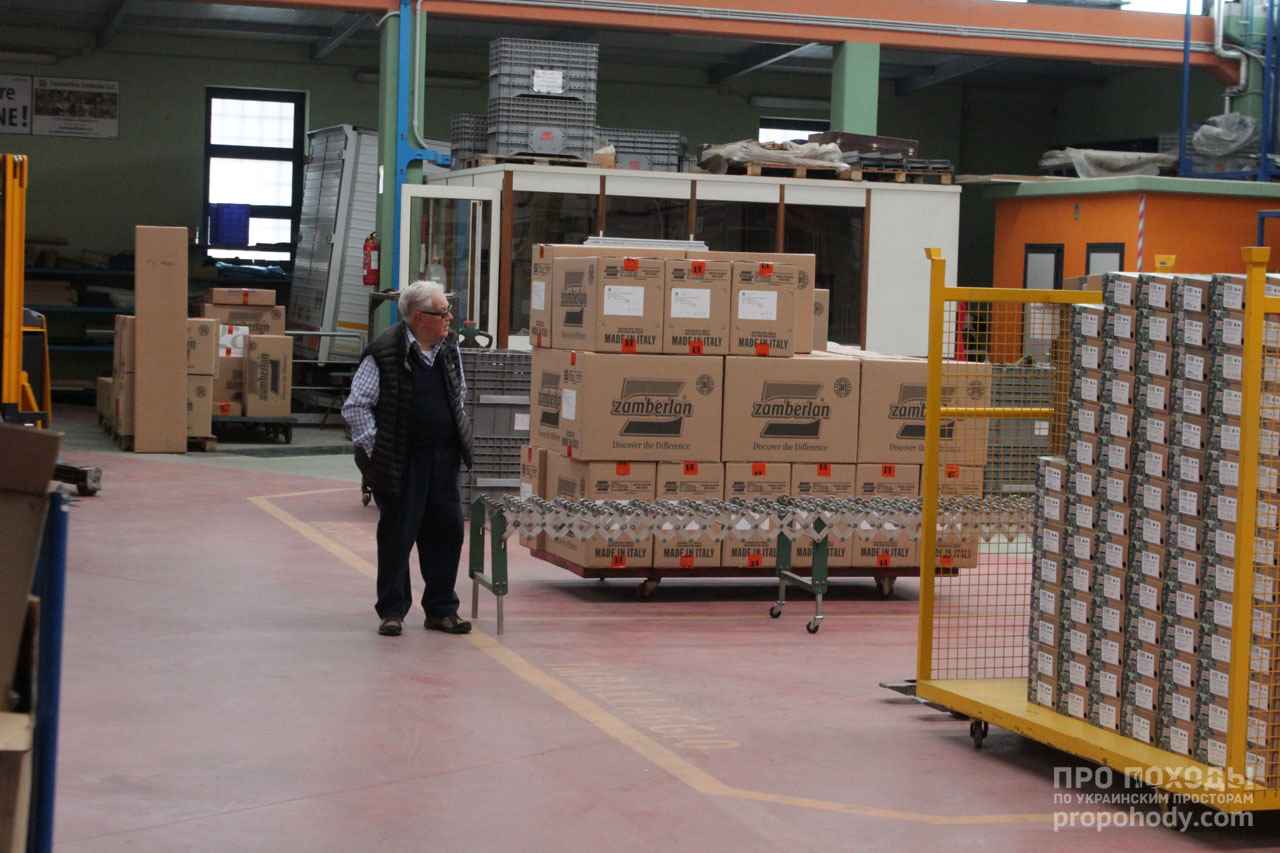 
To my surprise, in addition to open-aired climbing facilities, there is an inside hall at the factory, which we have tested that night with pleasure.

The most interesting event for me was planned on the third day that is a visit to the footwear production lines. I would like to say about this part of our trip in more details.
The excursion along the factory has been guided by Marco Zamberlan. He perfectly knows all the nuances of the footwear manufacture, and can easily replace any worker at any operation. 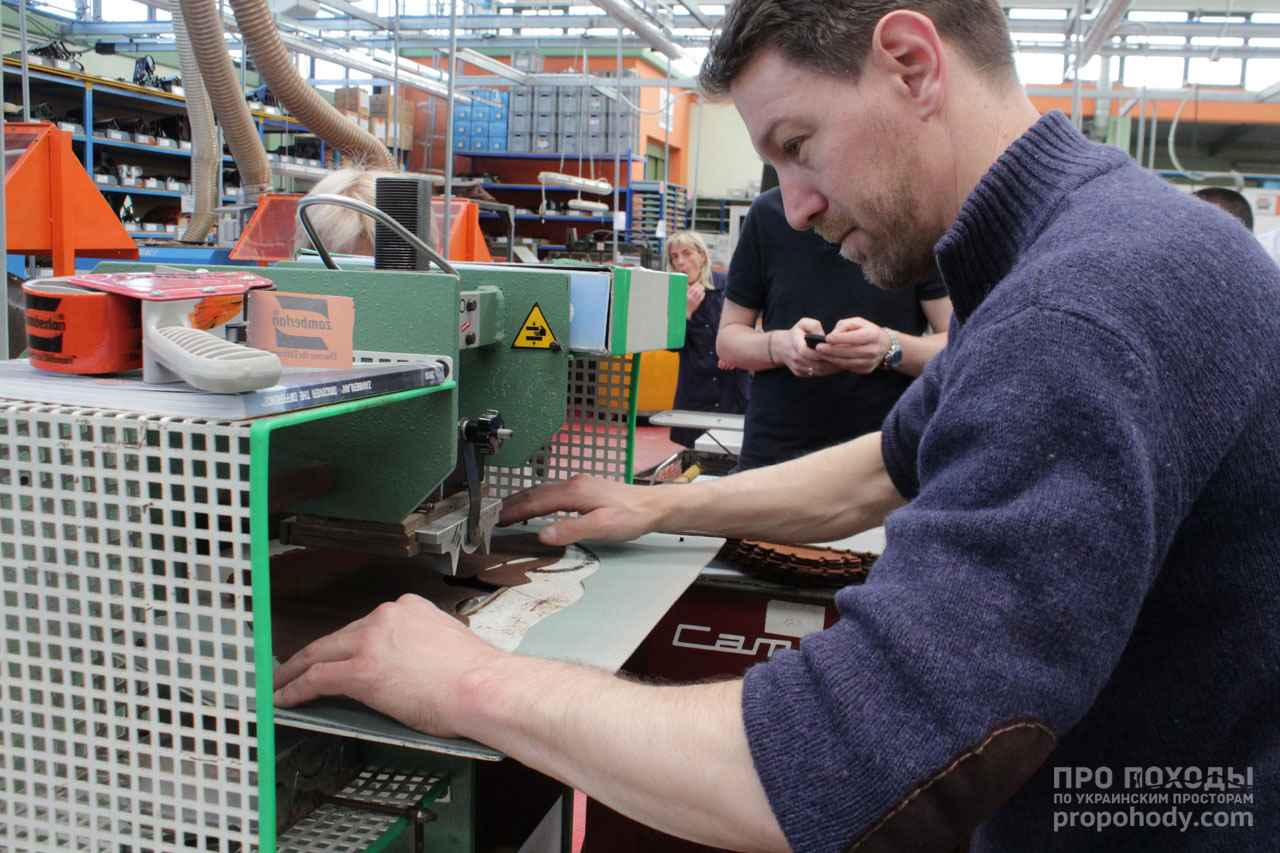 We have started from the warehouse, where considered different materials, which are used in the footwear manufacturing. As it seems out, there are a dozen types of the leather yet: from an upper layer of the whole-grained one, through nubuck and saw cuts to a lower layer of the chamois. And each type differs in accordance with the length: from 1.5 to 3 mm (0.06″/0.12″). The fact that only the leather from the animal back is suitable for the manufacture of the qualitative footwear makes me wonder. The leather from sides has rather worse characteristics due to an animal is “wearing it off”. 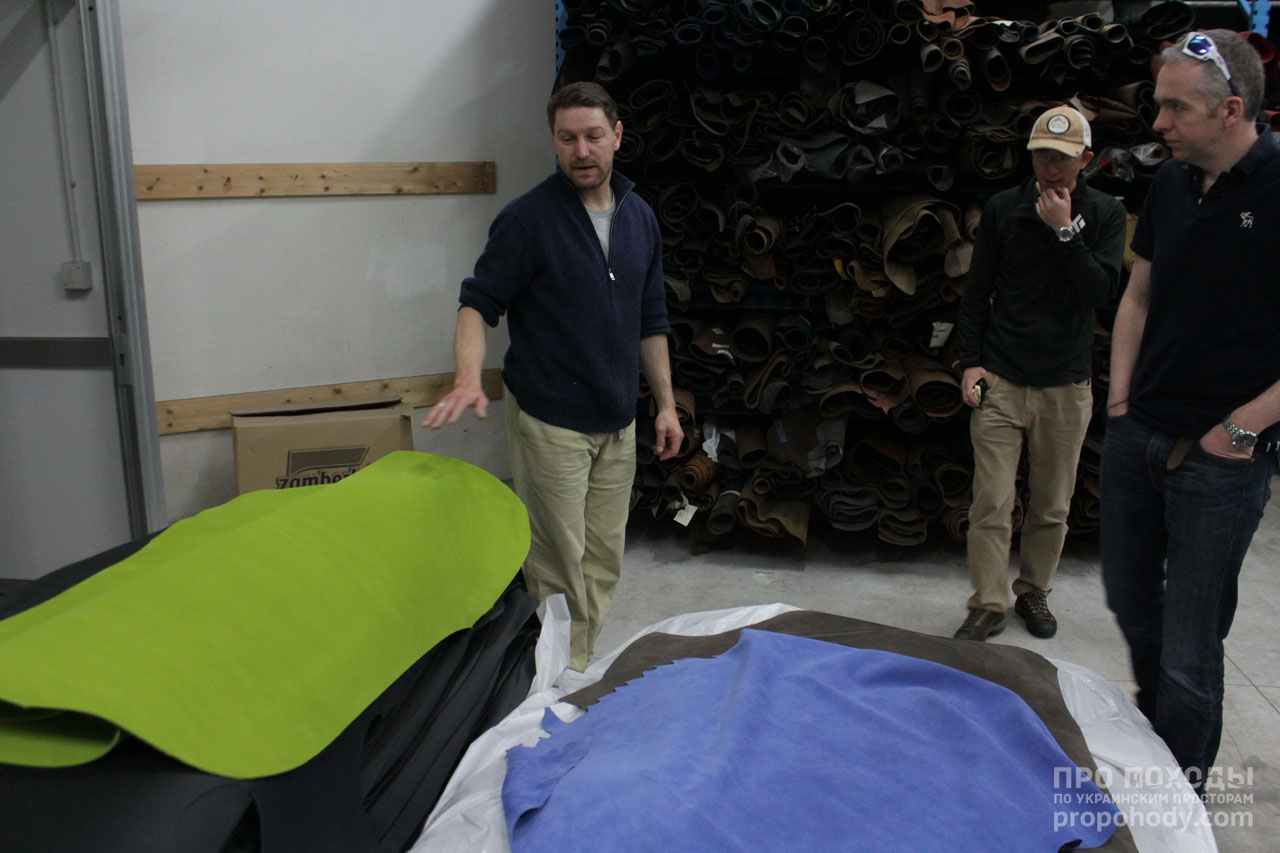 The manufacture of membrane Goretex is not an easy operation too. Firstly, the representativeness of company Goretex requires of sending the leather samples for the quality inspection, and only afterwards, it approves the sale of the membrane to the factory. And also there exist several sorts of Goretex, they differ from each other by a lining to the membrane. The last one may be only evaporation or even insulation of 1 cm (0.39″) thick. 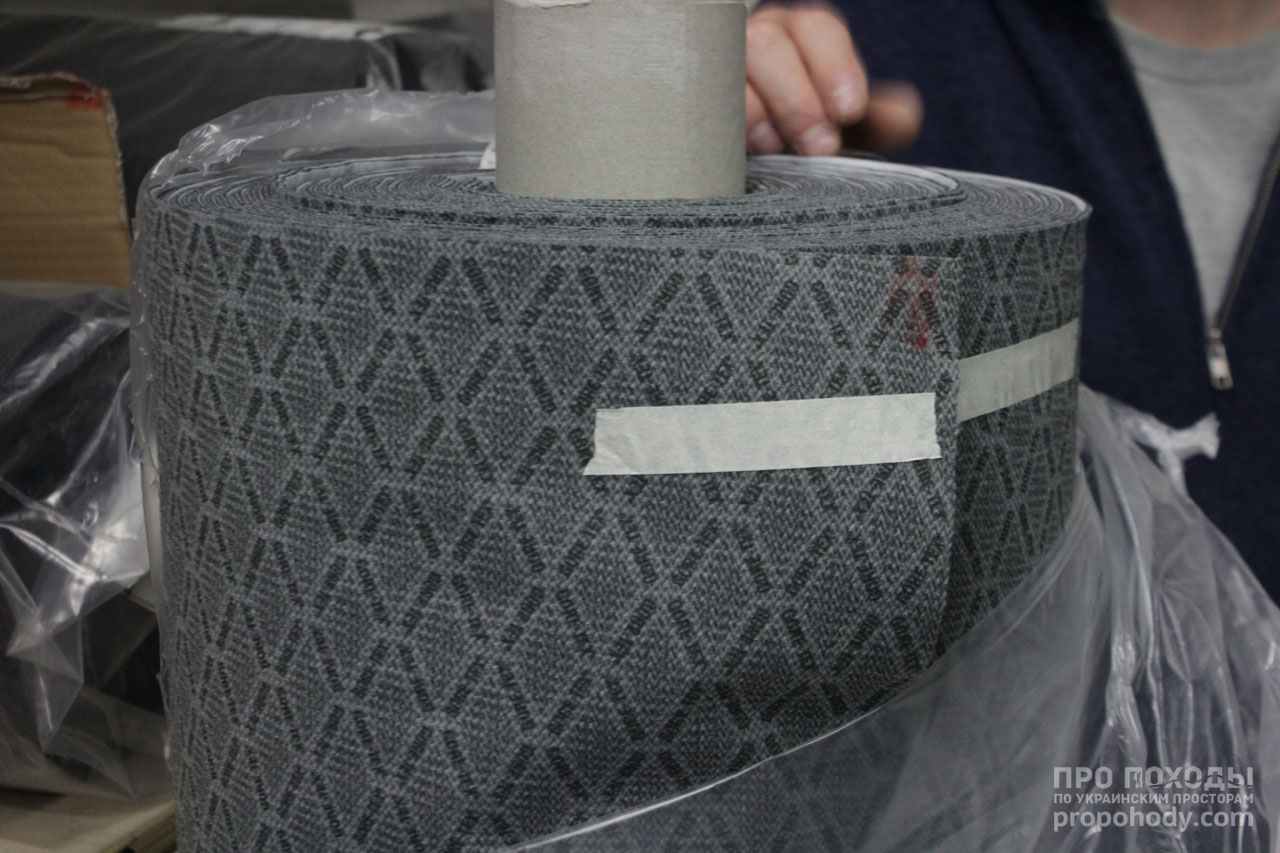 In spite of the quality inspection, the factory Zamberlan makes received materials testing at the special machines of the firm Goretex. Here the leather is tested for the elasticity, fatigue restrictions, puncture resistance, water impermeability and breathability. 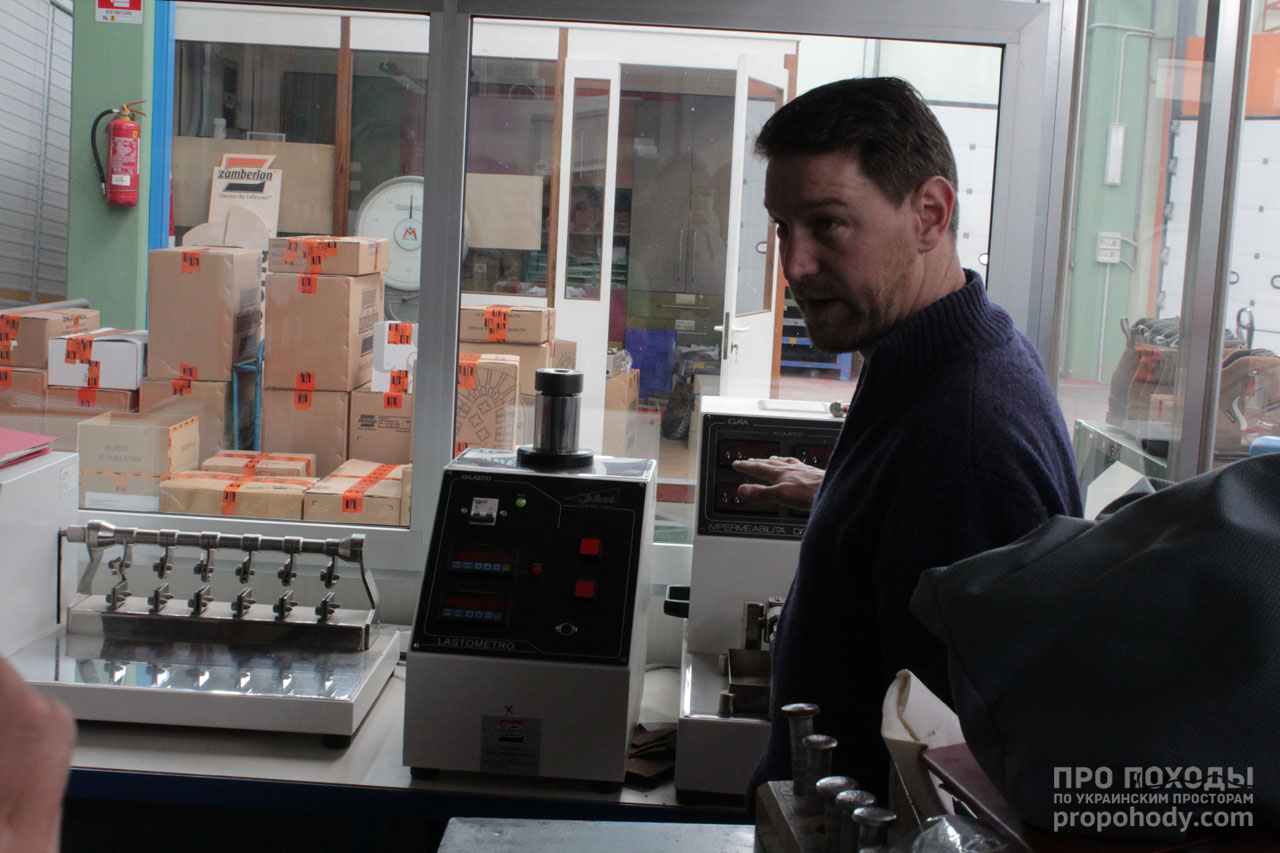 As Marco has said, the leather used at the Zamberlan factory is the best leather produced in Italy.

The first stage of a new model design is a shoetree production. Foremost several wooden shoe trees are made manually, and on the base of them, the prototypes are prepared. 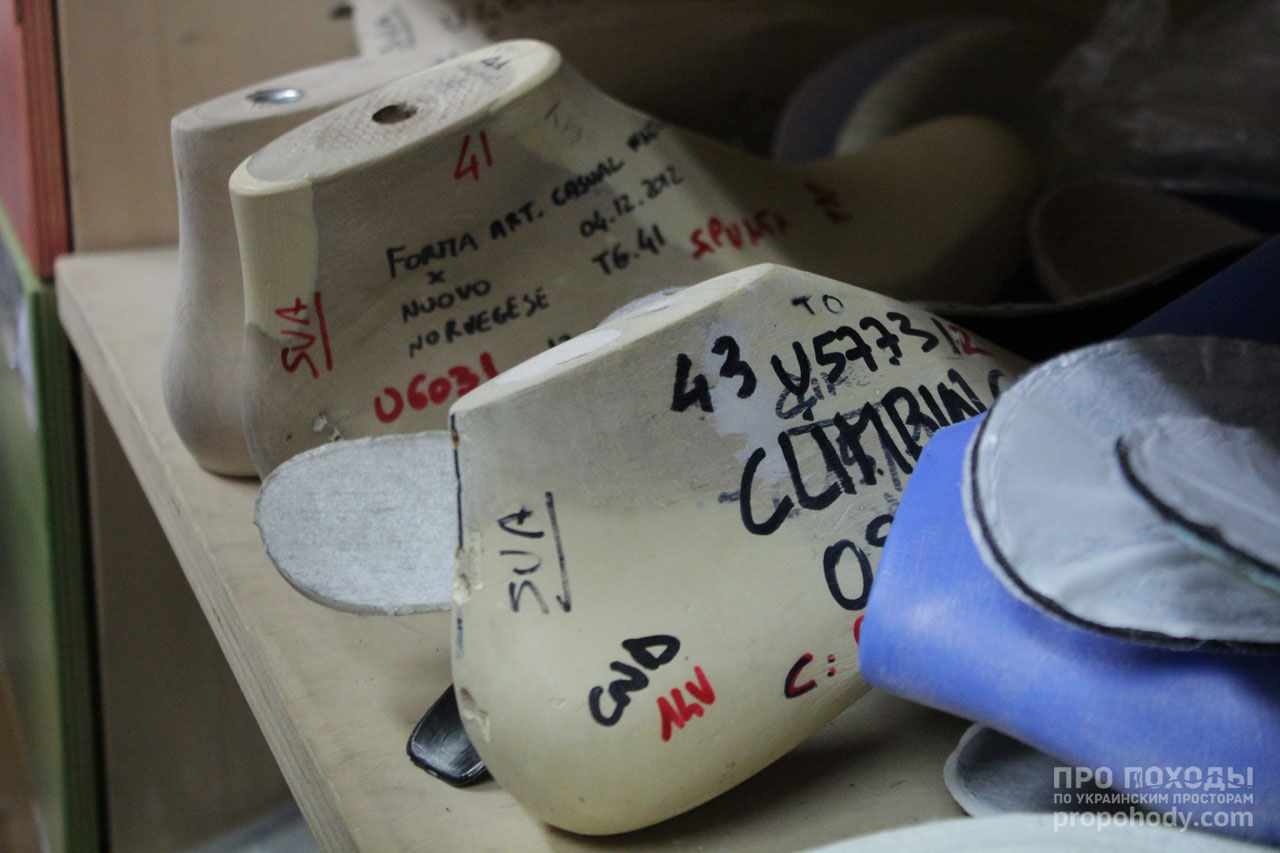 Each prototype passes the control of comfortability and the best of them is selected. According to the sample of the prototype of selected wooden shoe-tree, the plastic shoe-trees are molded for the conveyor. 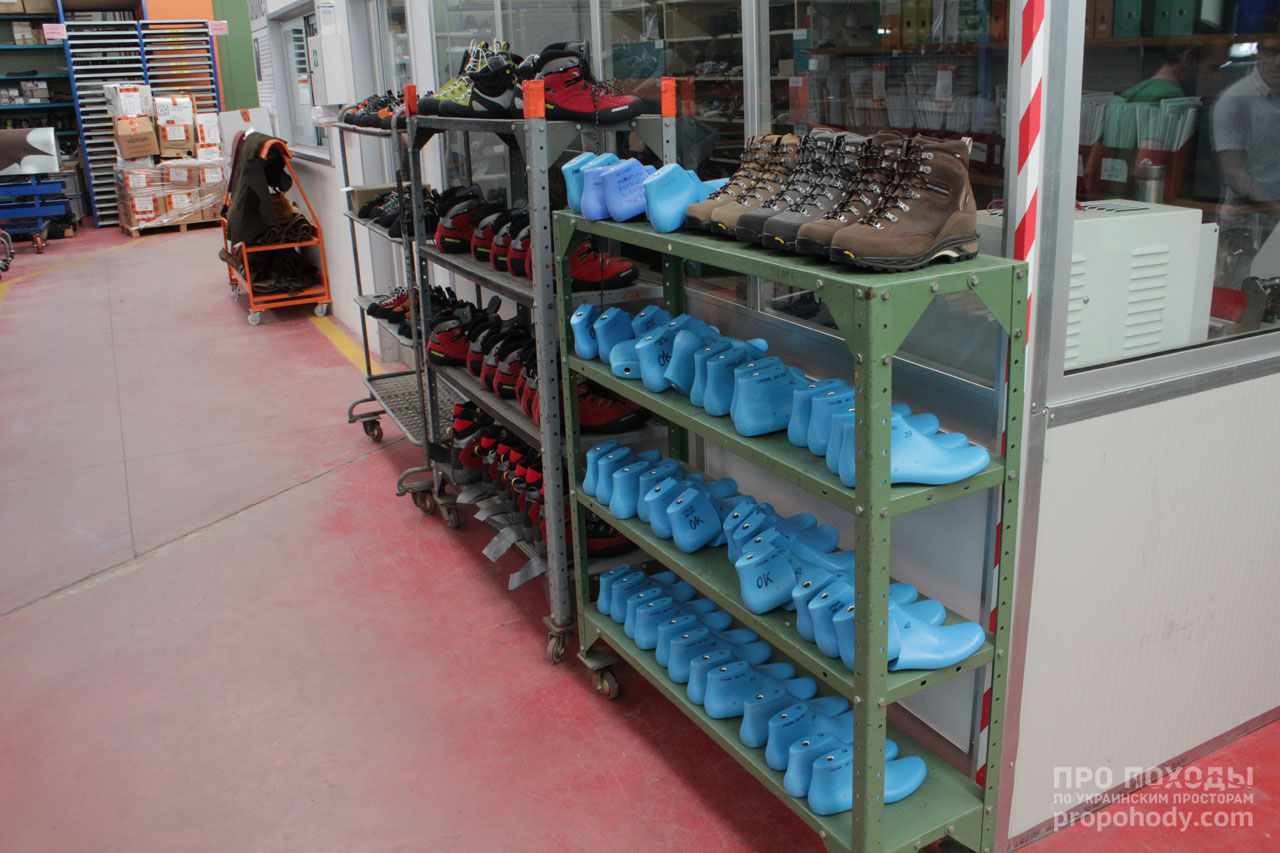 Further, the patterns are working out. The design of a future shoe is drawn on the ready-made shoetree, covered by the material similar to papier-maché. After that, the external covering is put away and unwrapped on the flat surface. The result is the preparations of patterns.
But in order to the automatic machines can cut the leather, the patterns should be digitalized. 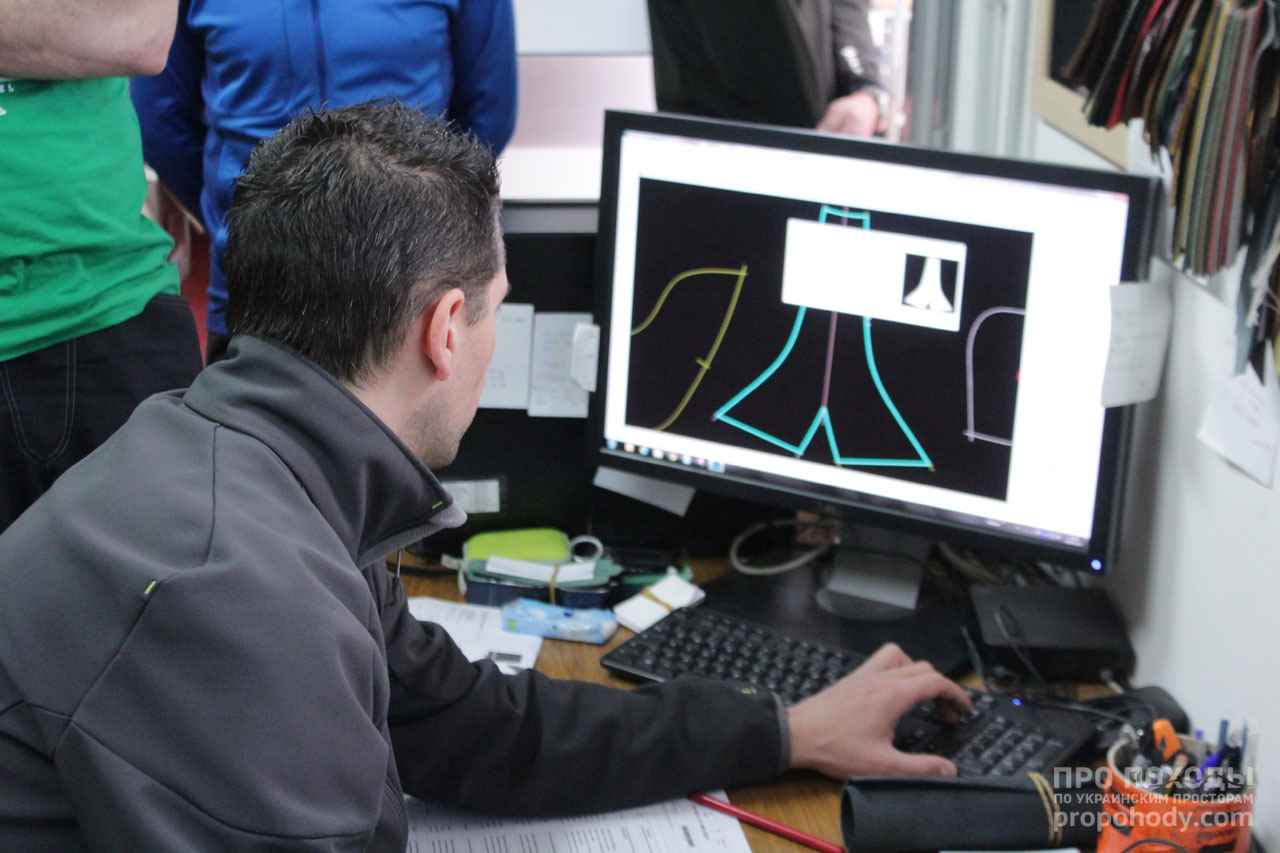 In correspondence with the program, the machine momentary cut the leather and operator should only put out the patterns from the complete piece. 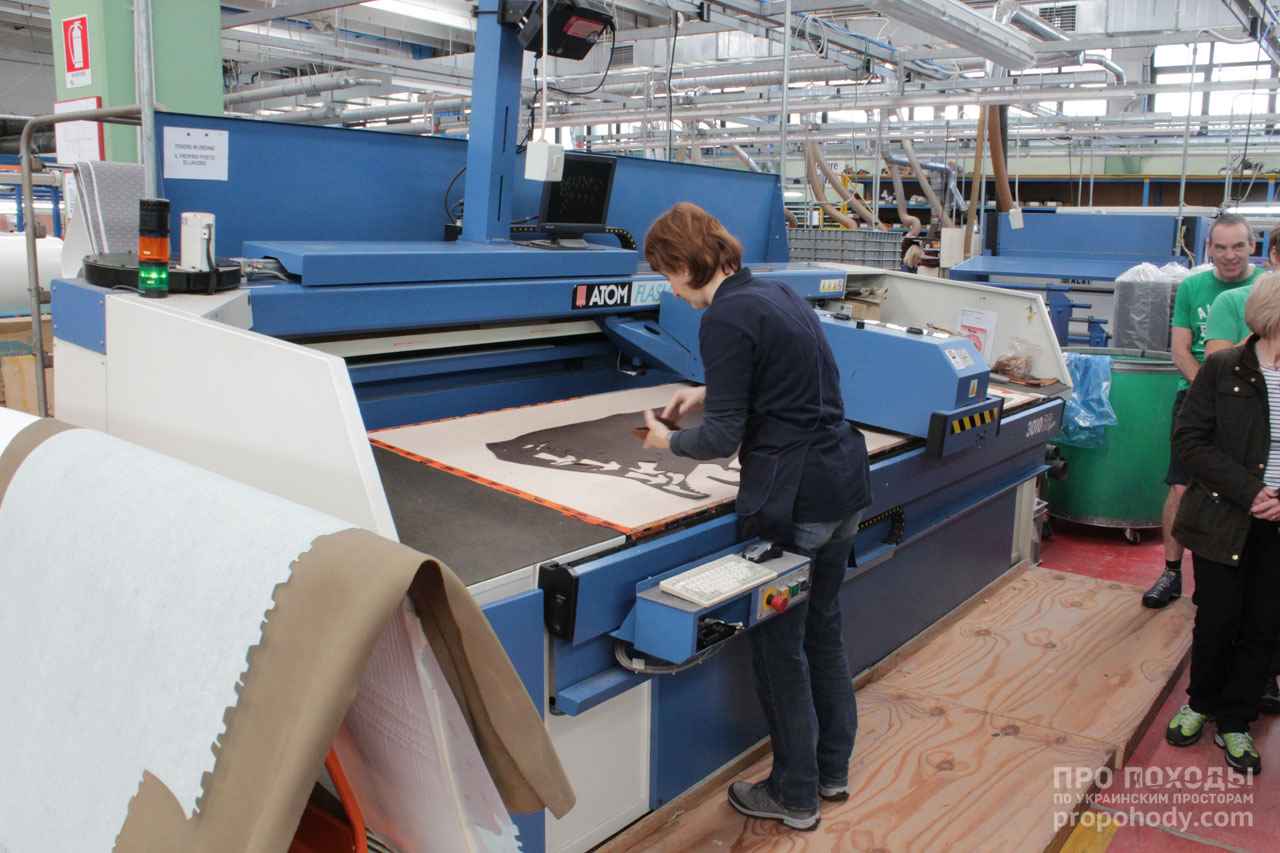 Then the patterns pass through a number of processing operations, their quantity depends on the shoe model. For instance, for the shoes with a rubber cover, the last upper layer of the waxed leather is removed, in order to improve the glue adhesion. 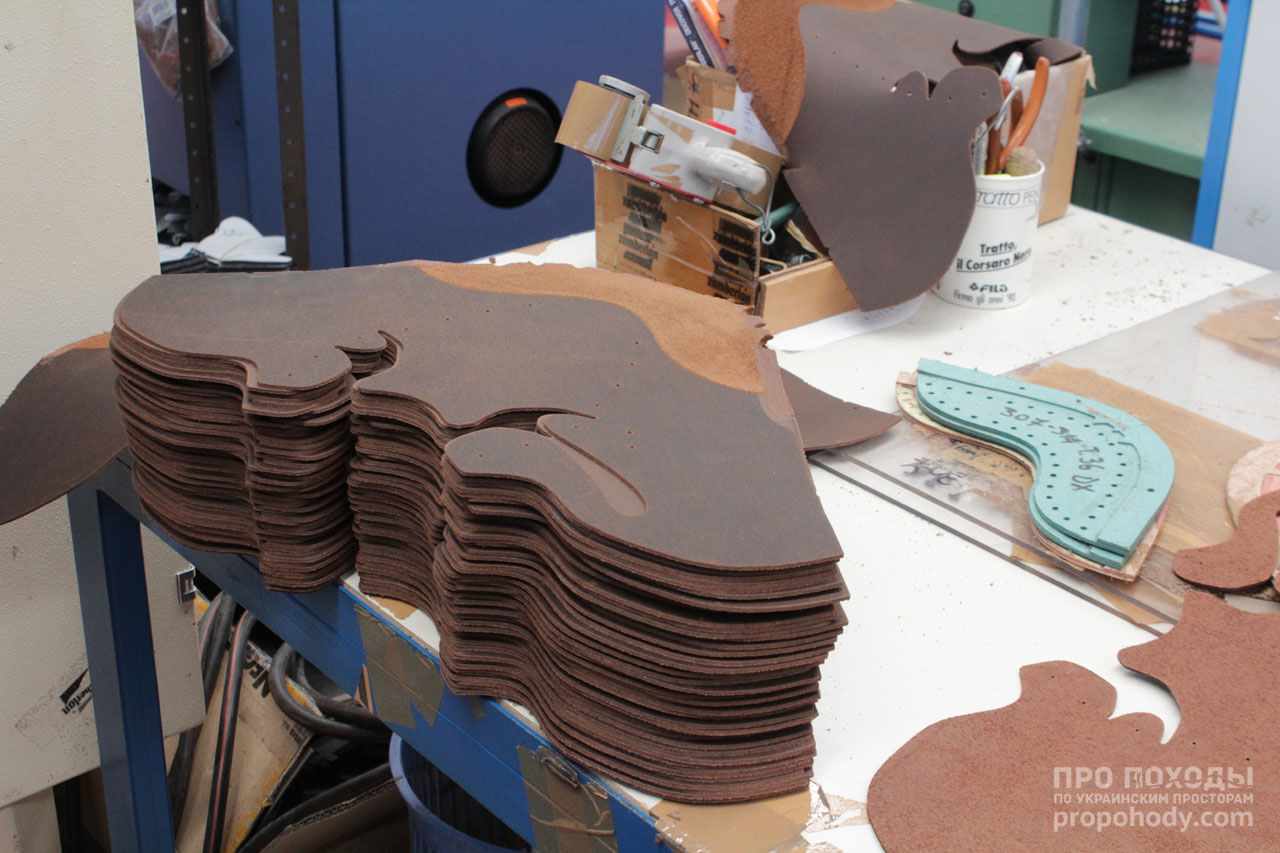 Thereafter, by means of pressure, the areas of future folding are made thinner and the pattern passes a preliminary formation. 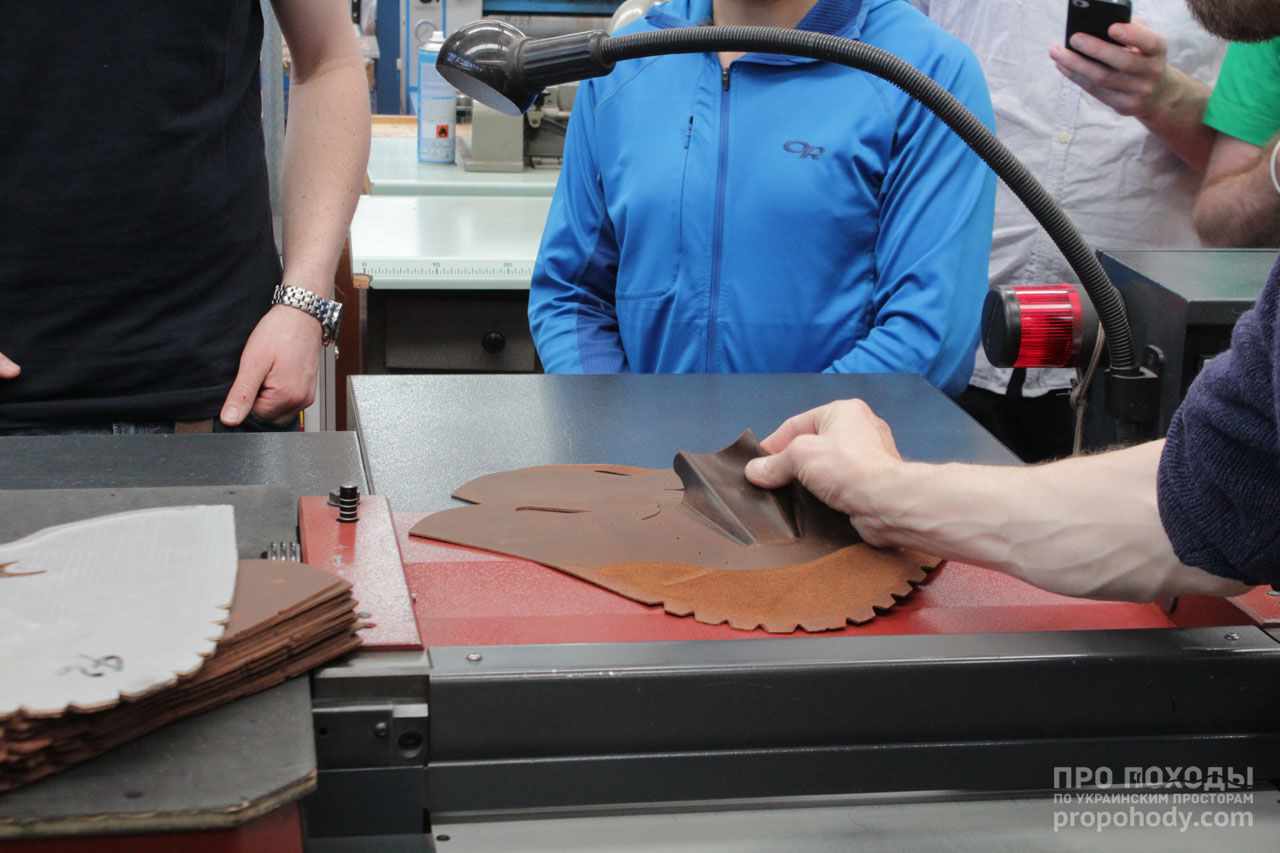 In a twinkling of an eye, the separate parts of the pattern are joined together, the rubber is glued outside, and the strengthening elements are stuck inside. A semblance of a shoe appears. 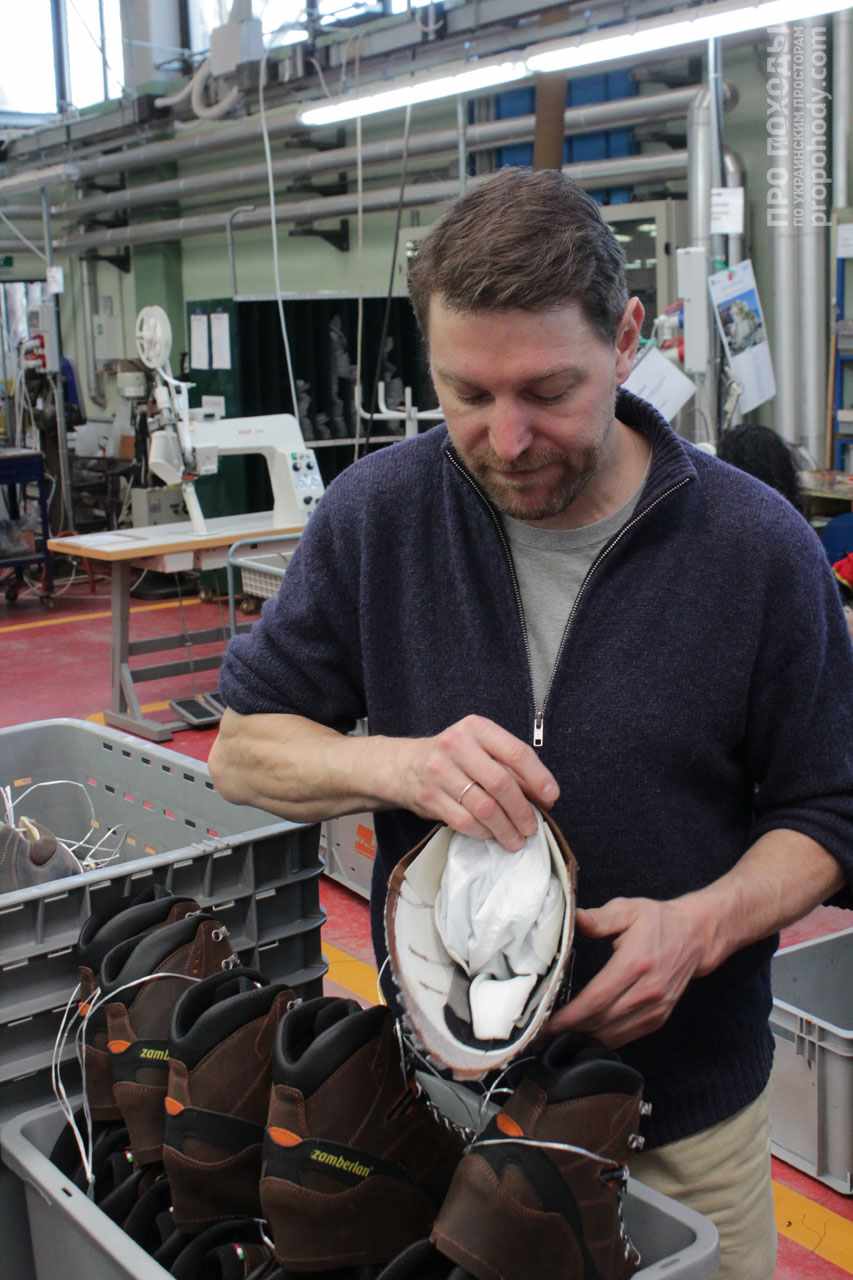 The process of membrane sock manufacture deserves a detailed description.
First thing, the parts of the sock are joined together. 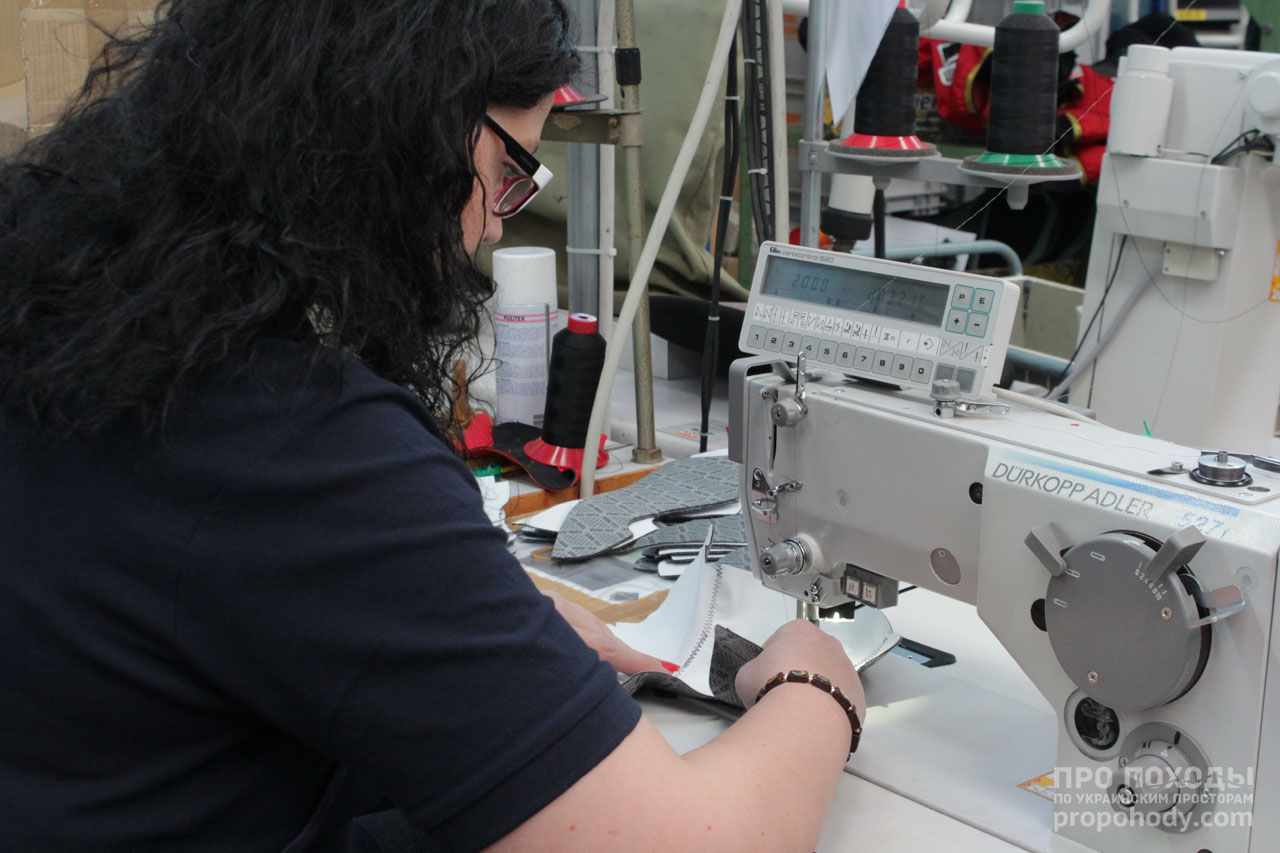 Then the seams are pasted on by a thermal film. 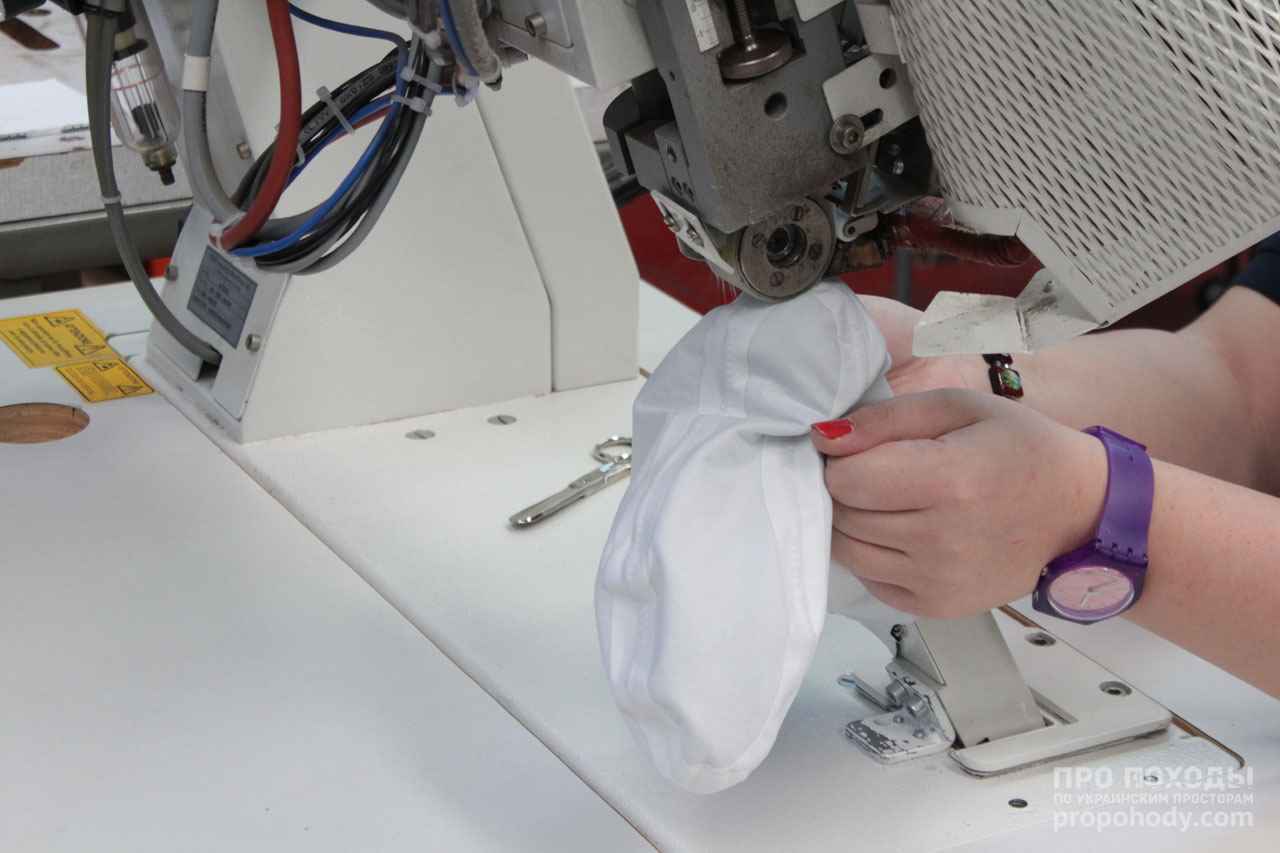 And when everything is ready, the membrane sock is tested for water impermeability in a reservoir full of water. The sock is filled with the air and dipped into the water. 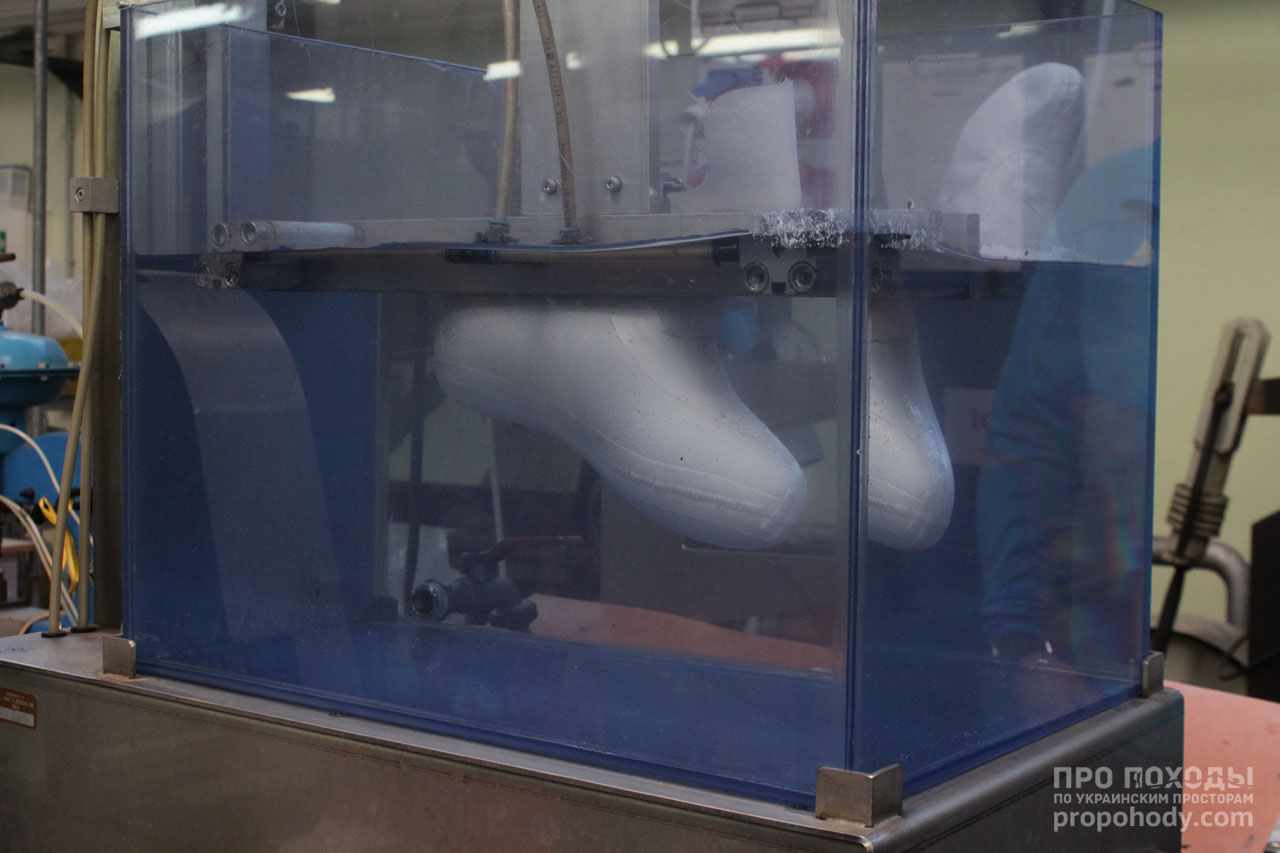 If the bubbles are penetrated through the fabric, it is rejected immediately. And absolutely each (!) shoe at Italian factory Zamberland passes such a test.
Next thing on the agenda is the formation of a leather preparation. This process is divided into two stages, each of them consists of two operations.
Firstly the back side of a shoe is formed. It is conducted by means of a special machine. 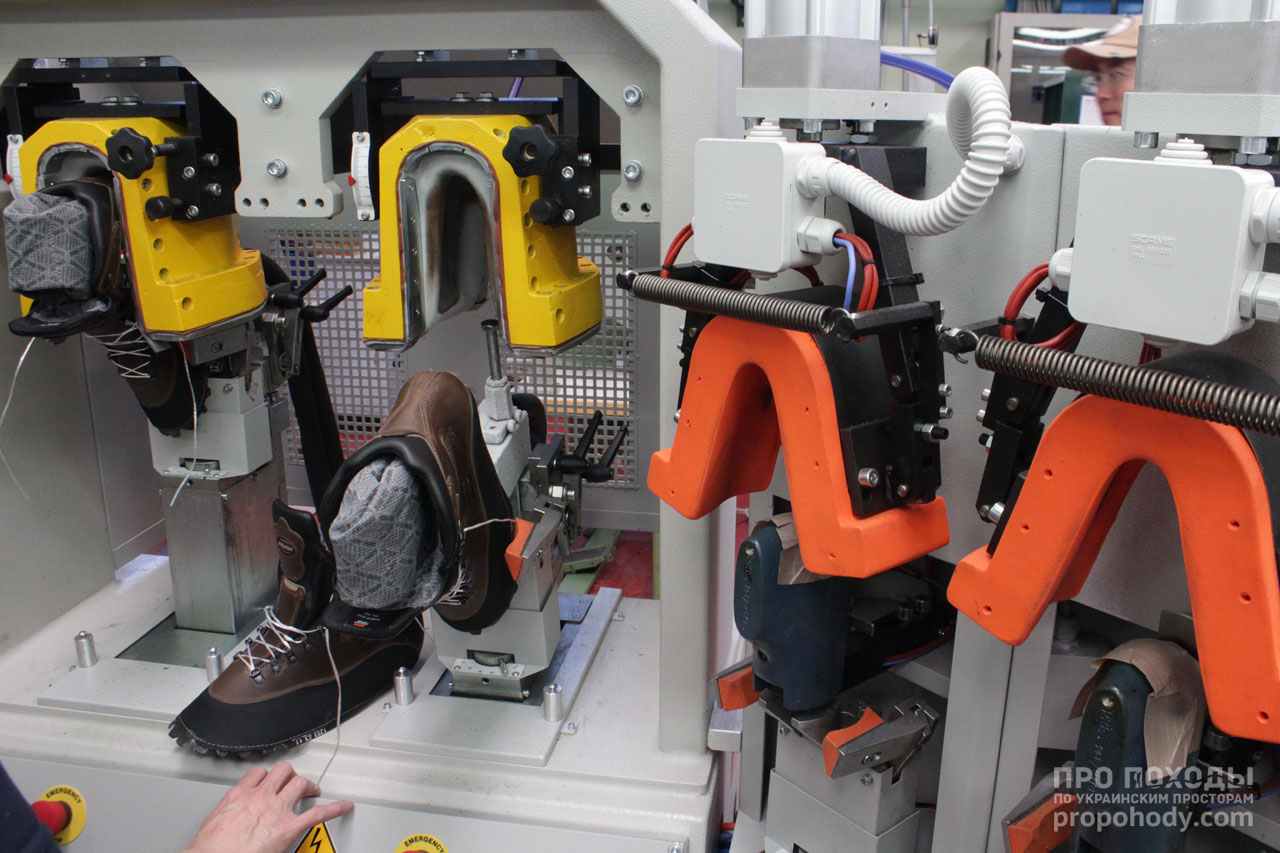 The operating principle is simple: the pattern is put on a shoetree under orange tool and pressed. The orange fixture heats up the leather to maximally possible temperature, afterwards the future shoe spills over to the shoetree under yellow fixture, which is forming one. Inside the yellow fixture and shoetree are the pipes with liquid nitrogen. The leather of a shoe gets momentary cool keeping the defined shape after falling on the super cold details.
The formation of a sock starts with inserting a supporting shoetree and lasting the temporary lacing. The shoe passes through a steam chamber for repeated softening of the leather. 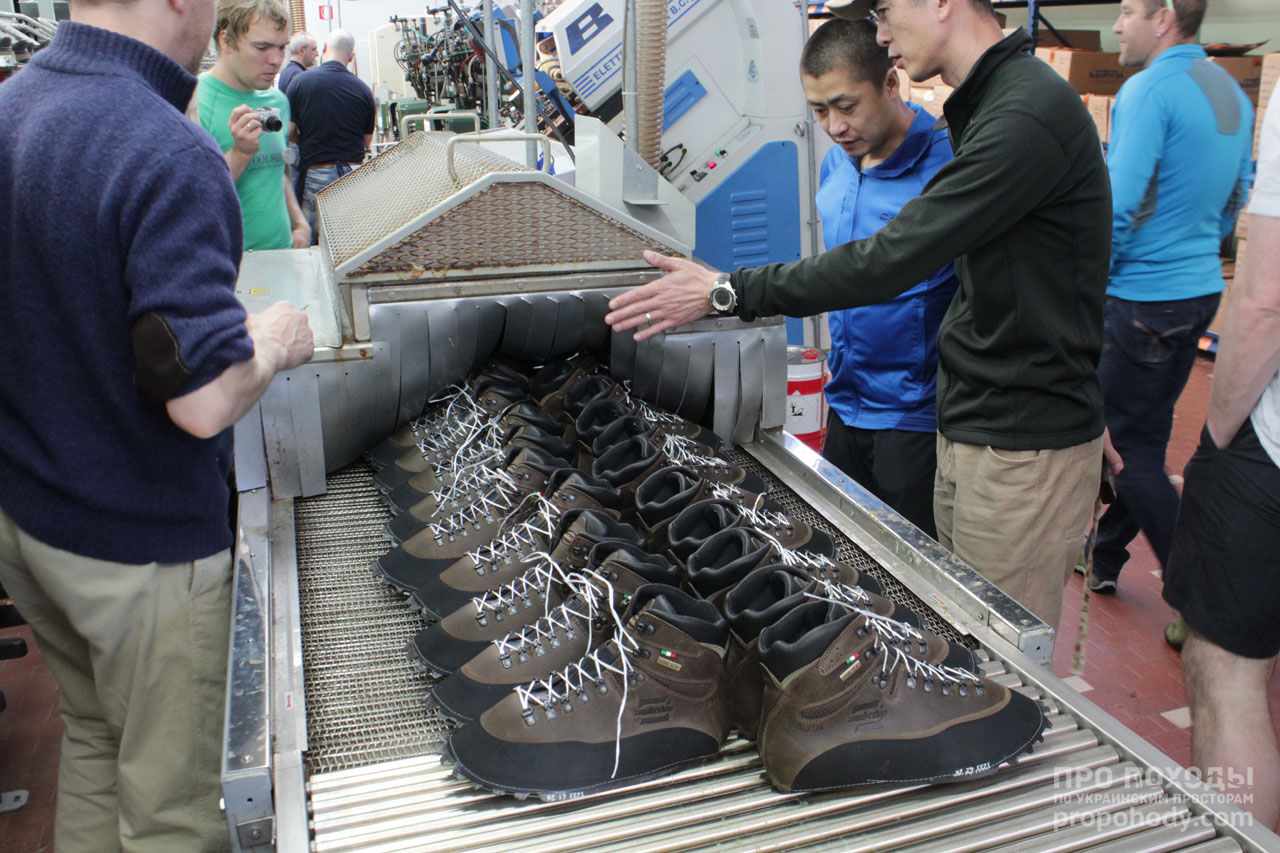 As it leaves the chamber, the preparation is taken by a worker and put into the press, which tentacles grab the shoe along the perimeter and the preparation is pressed into a sock. Right in front the eyes the flat workpiece is turning into a volumetric shoe, albeit without a sole. 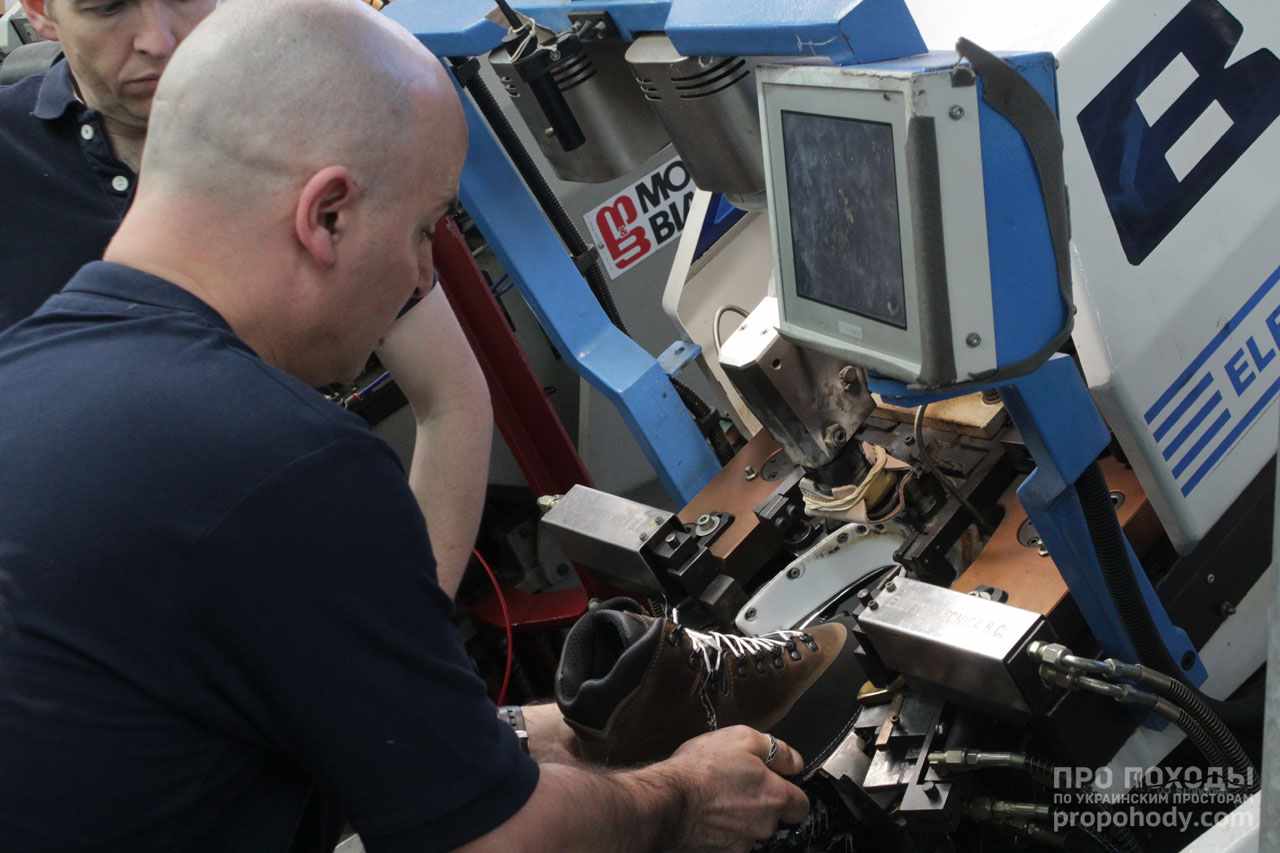 
The next important stage is setting of the soles. There are two soles in a shoe. The inner sole is responsible for correct support of the foot and comfortability. It is set the follows machine-tool. 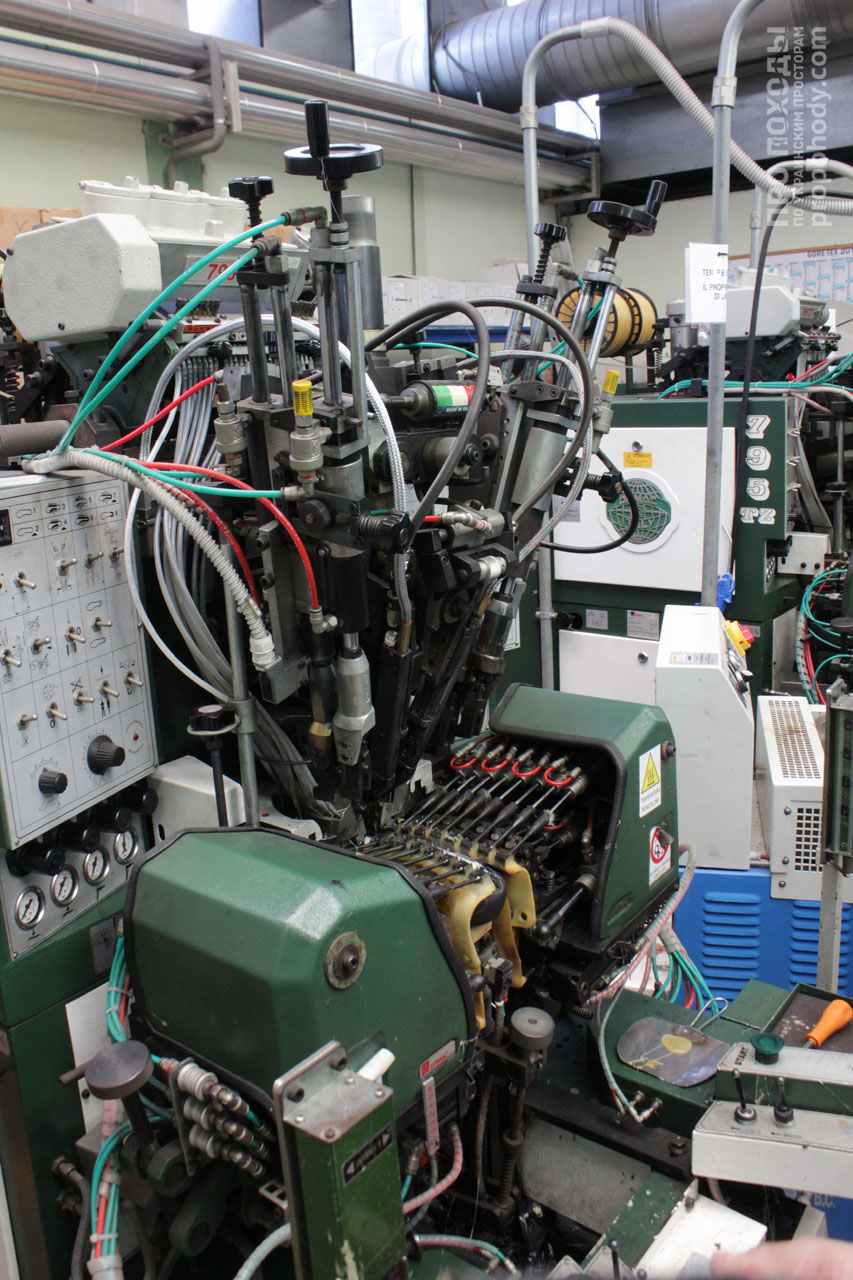 Fixing the workpiece with a shoetree, it applies the glue in the inner sole and the edges of each preparation is pressed while heating them up. The glue becomes solid in several seconds and the sole remains firmly fixed.
For the setting of an external sole Vibram, the press is used. 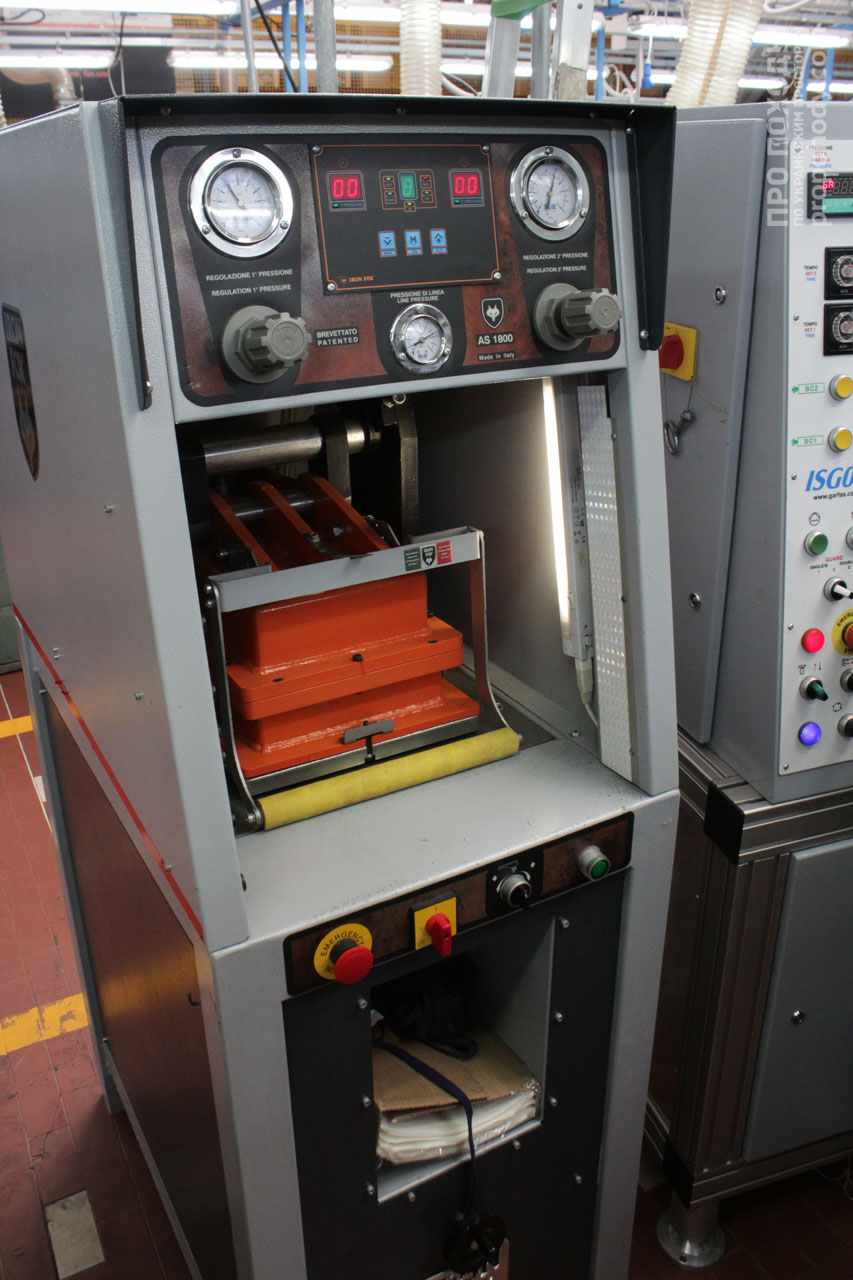 The preparation and sole lay with applied glue, and when its adhesiveness reaches to the required station, the shoe is pressed and heated up again. The glue firmly joins all the parts together. All that is left to do is to clean the shoe from the stains and transfer it for final lacing and packaging. 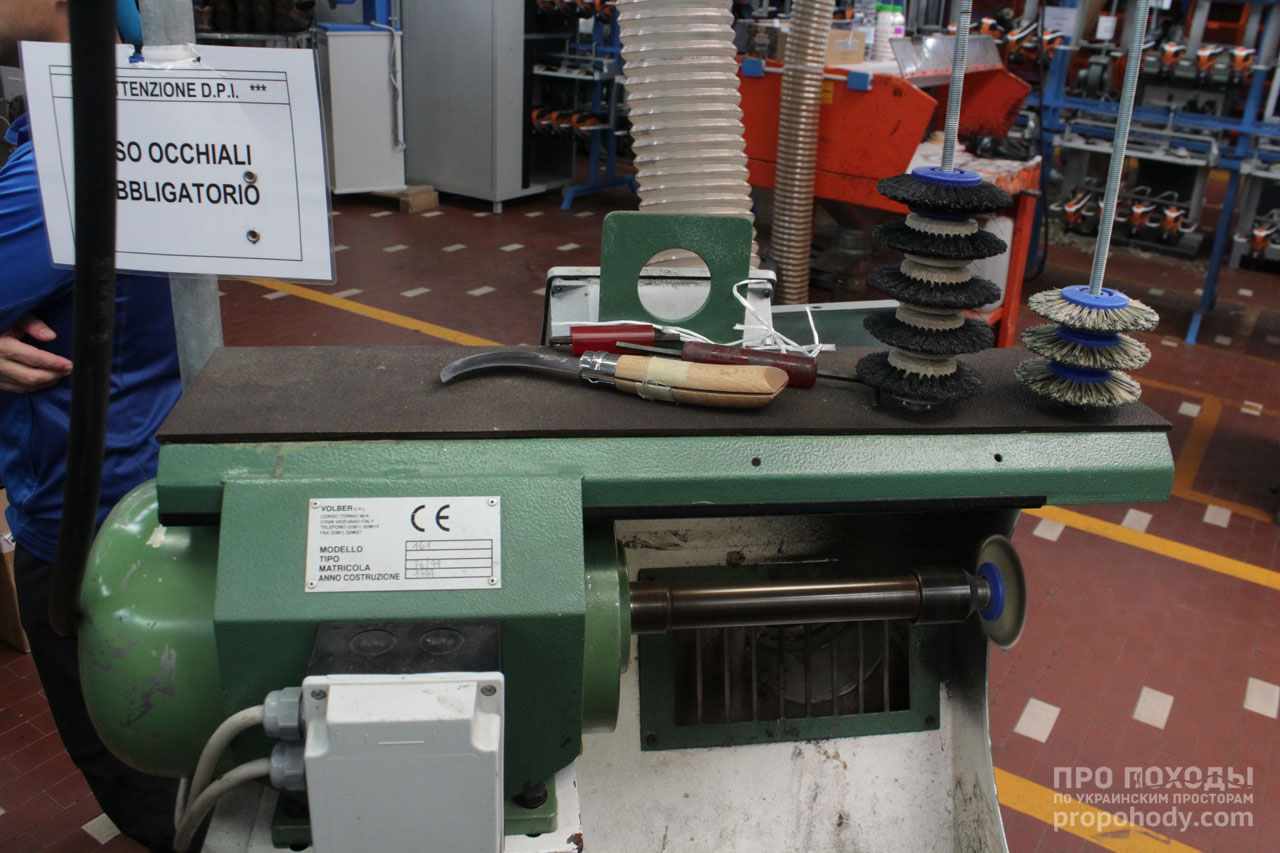 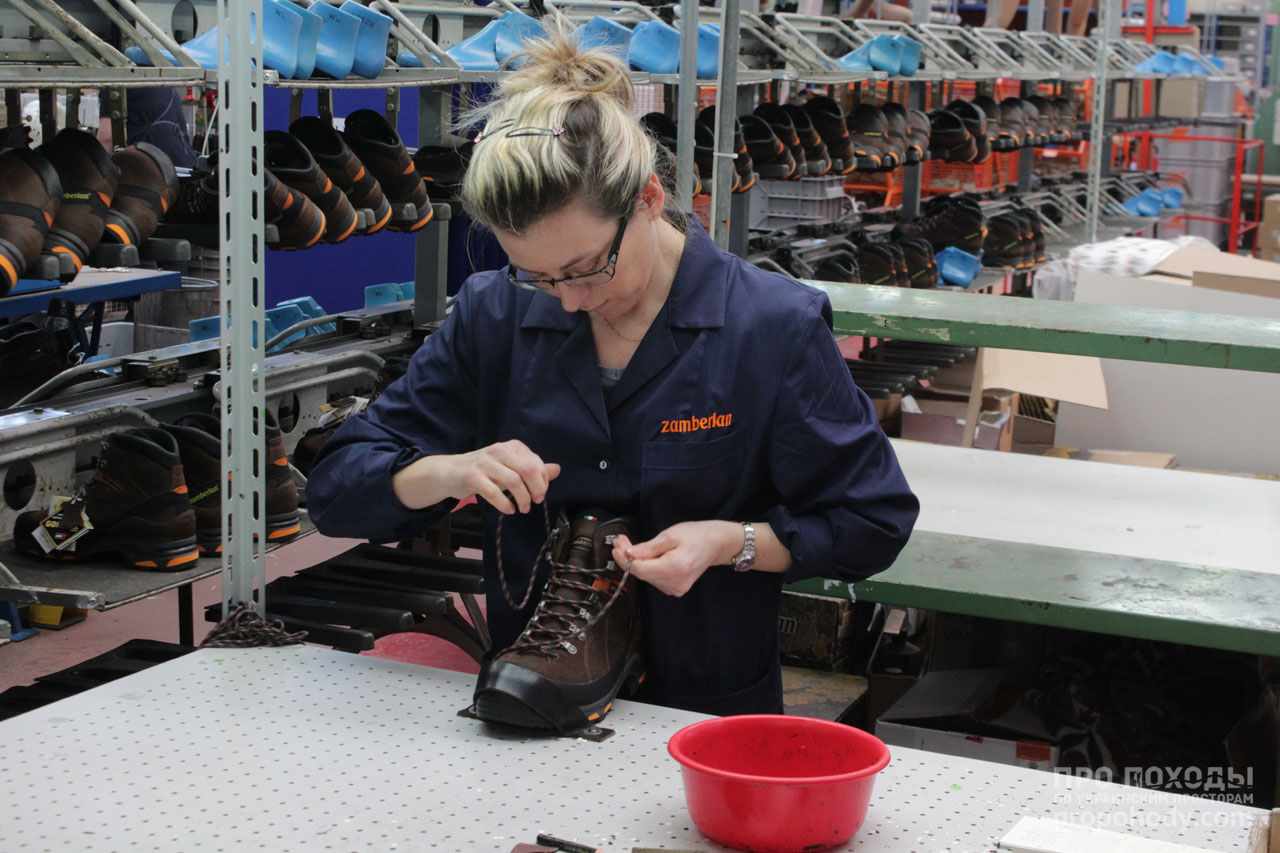 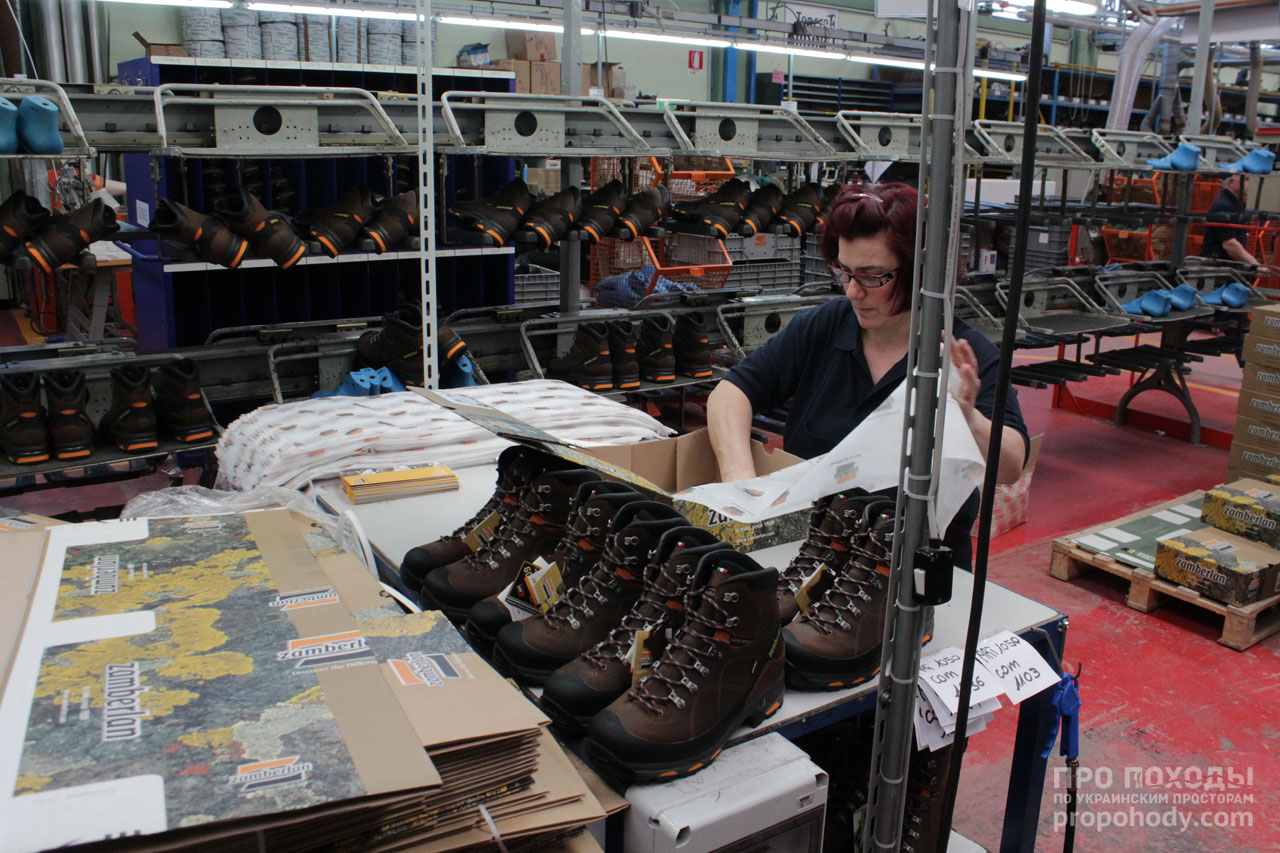 
I hope it will be interesting for you:) Ciao! 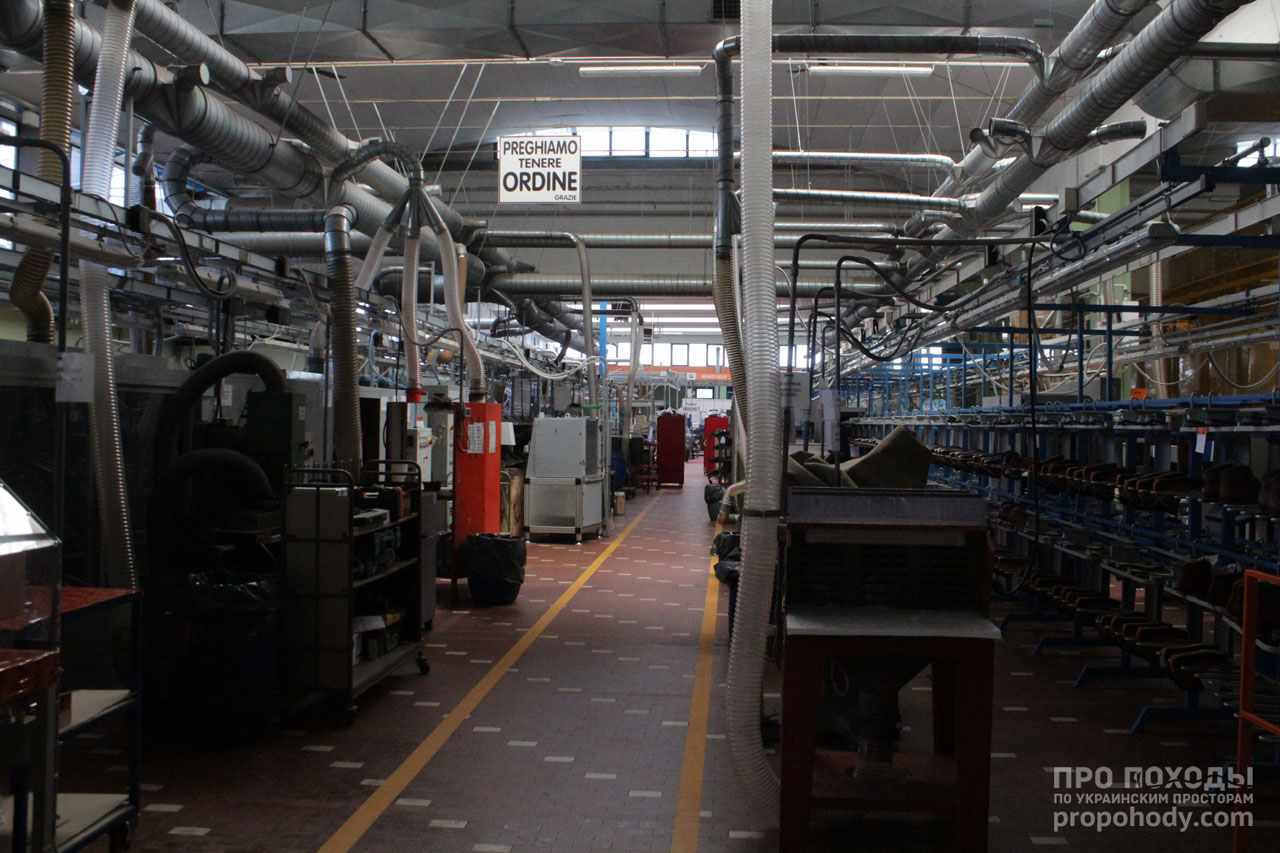 P. S. Such a beautiful place is situated near the fabric!

This article was translated (propohody.com)