Eminem, the legendary rapper, went for a little sneaker shopping spree with Joe from the team complex. Eminem expressed his ideas about sneakers during some shopping and told us about his sneaker collection, collaborations, pet peeves, and a lot more fun stuff that you really don’t want to miss out on. 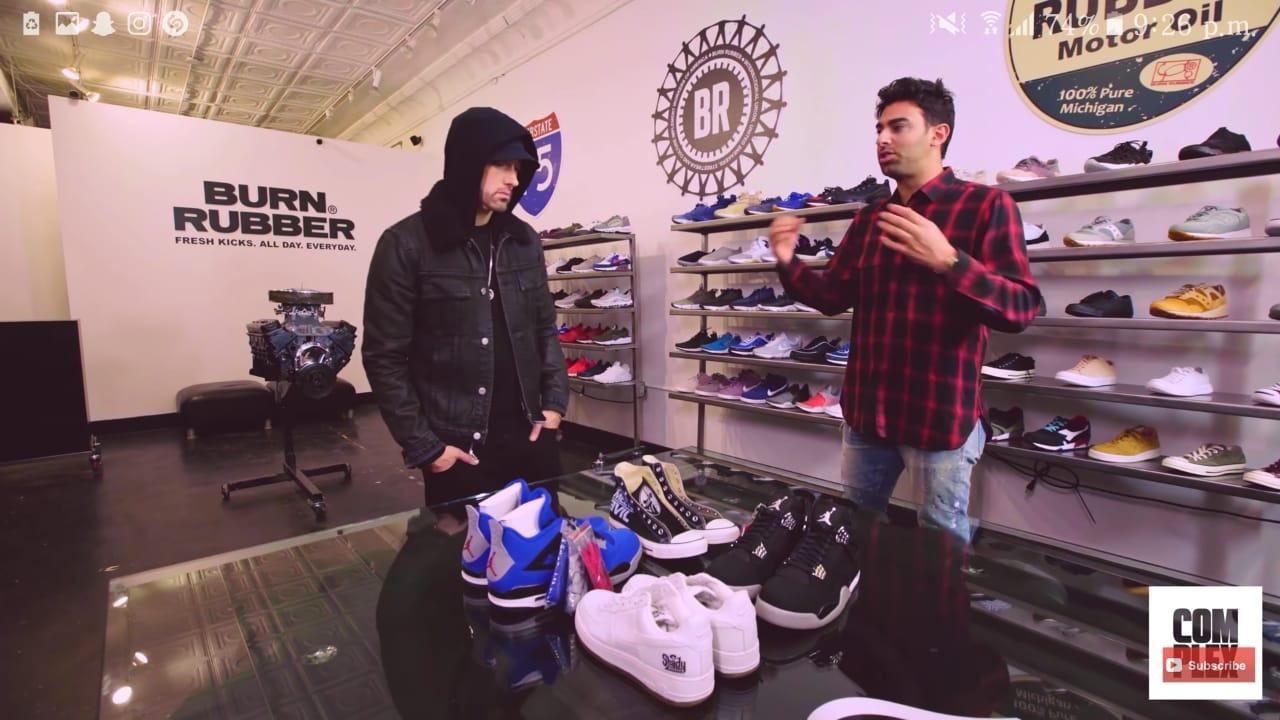 According to Eminem the shoes are 90% of an outfit; shoes matter a lot. Eminem is a shoe collector and loves to buy shoes. Talking about his latest collaboration, he revealed that he buys a lot of expensive shoes, but sometimes he keeps the shoes in his collection for a while before he sells them anonymously on the internet.
Upon a question of Joe, Eminem said that the earnings from his collaborations go straight to charity. His collaborations don’t come out consistently; that’s why his collaborated shoes are rare and are sold at a whopping price. Moreover, from the interview, we came to know that Eminem loves Nike shoes since childhood, and he loves working with them; he also has a passion for Jordan and loves to work with them too on almost everything.

Joe gave us a look at some of Eminem’s collaborated shoes that were certainly above the mark. Shady Records (2004), Bad meets evil with Royce, the car hearts, and Eminem X Air Jordan 4. Eminem expressed that his favorite shoes from the collection are the Eminem X Air Jordan 4 despite the fact that they are a little complicated to style because they don’t go with every outfit. The viewers had a sneak peek of Eminem’s new collaboration with Jordan, the encore Jordan selling at a whopping price of $75,000. Eminem told Joe that the collaboration has been on 22 pieces and the profit will be going to charity during the holidays. 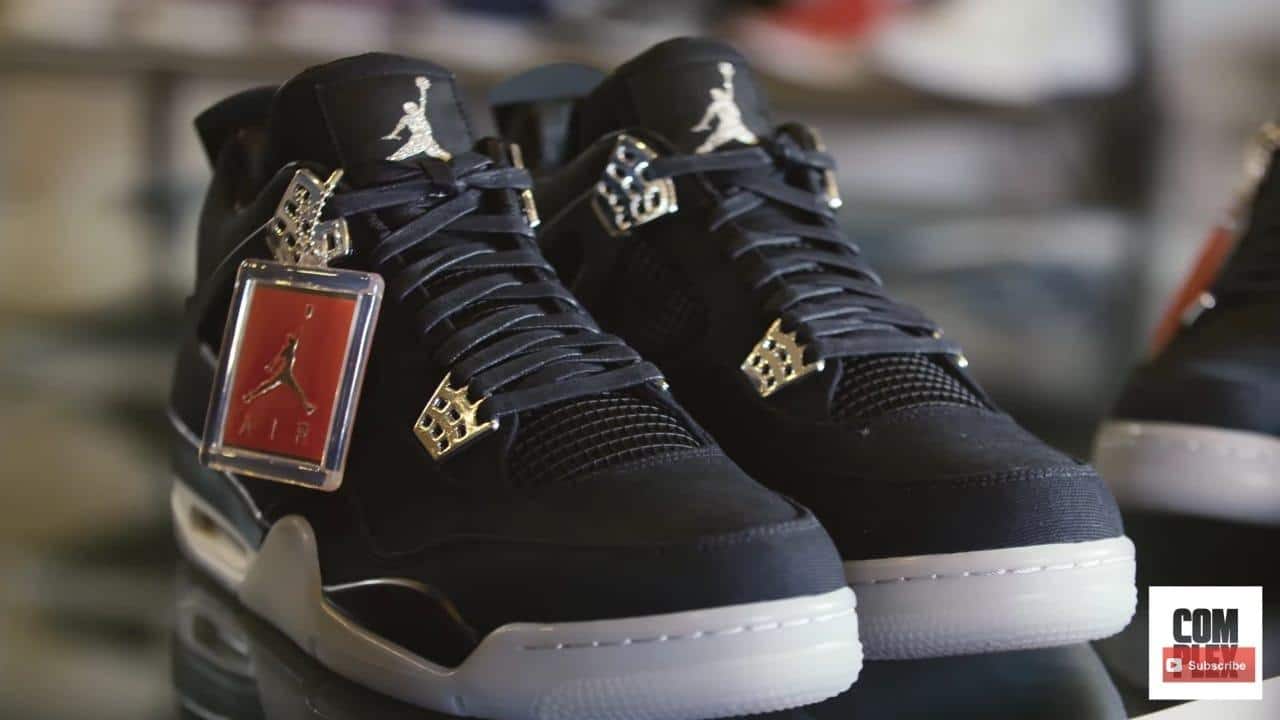 Eminem was highly impressed with Jordan when they came out with easy-e. He further told Joe that he recently bought the Air Jordan 6 “Gatorade” for his collection. Eminem quoted a memory that his mom made him choose between an outfit or shoes, and he always chose shoes.

When discussing his pet peeves, Eminem said that he avoids shoes with pointed corners because they seem like clown shoes. When Joe talked about the recent social media trend of showing off new shoes, Eminem added that he understands the excitement. Shoes make every outfit look a hundred times better, if you’re wearing a good pair of shoes people will surely respect you.

Prior to the interview, Eminem performed in the UK and wore an Adidas pair of sneakers. Eminem said that he loves Adidas and likes to wear them on stage because of the high comfort level. During the performance, he wore Adidas NMD R2 “white/red,” which cost around $160.

Joe asked Eminem about his experience with 50 cent in the reebok deal, to which he replied that he enjoyed it. Furthermore, Joe disclosed that drake wanted to get into sneakers before beats; Eminem had a different opinion about it; he thought that drake should’ve got into sandals or something.

Read also: How To Tell If Nike Air Max are Fake? 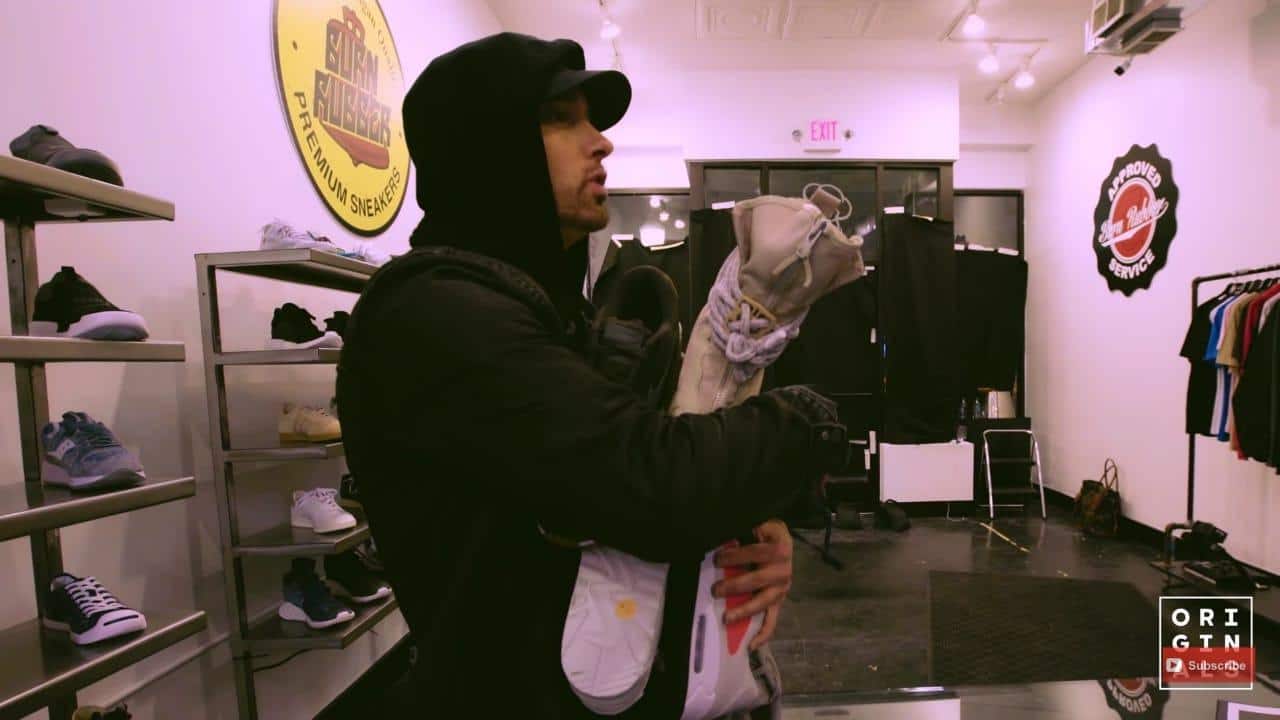 This little fun interview session was loved by millions of Eminem’s fans worldwide. Eminem is such an inspiration for many people and they like to follow his style and preferences.

Note: COMPLEX is a community of creators and curators, armed with the Internet, committed to surfacing and sharing the voices and conversations that define our new America.